The Countercultural Appeal of 19 Kids and Counting

Considering most of what we see on TV, the Duggar family is basically transgressive. 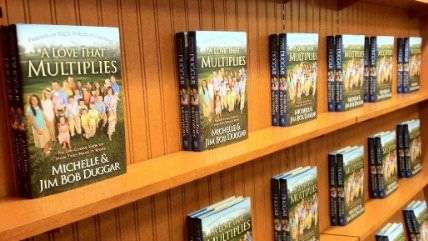 The new season of 19 Kids and Counting is here. And I'm excited. So what?

Generally speaking, I enjoy the most salacious, violent, and depressing television shows I can find. Maybe it's just a perverse form of escapism, maybe it's the high quality of shows being produced these days, but I can't resist "prestige" television—The Wire, Breaking Bad, Fargo, The Sopranos, Game of Thrones, House Of Cards, The Walking Dead and so on. For that matter, I also hung around for four seasons of The Killing and watched every episode of Halt and Catch Fire. So, apparently, whatever you make, I'll tune in.

It was only by chance that I stumbled across the decidedly wholesome and un-artistic 19 Kids and Counting. I showed up to mock the unbridled puritanism of a bunch of freaks—not to mention poke fun at my own family for watching such dreck—and I never left. I can't remember when it happened exactly and I don't know if I'll be able shake this bizarre feeling, but I do know that I'm hooked on what has to be the most countercultural show on TV these days.

For the unfamiliar, 19 Kids and Counting is a reality television show featuring the Duggar family of northwestern Arkansas. The Duggars are devout Independent Baptists, a fundamentalist offshoot of Baptism that, from what I can gather, is a bit cultish and has experienced some rough patches over the past few years. No matter; the Duggars never proselytize as far as I can tell—unless you count making a pious life with tons of kids seem fulfilling and extraordinarily fun.

What the Duggars do is engage in the reactionary act of producing a large number of offspring—all of whom are given first names that begin with "J" (though "Jinger" seems like cheating to me). Jim Bob and Michelle have also have gone through two miscarriages (the show deals with the family's grieving process) and have a couple of grandkids. And other comparably enormous families tend to pop in and out of their lives as the Duggars do their mission work and disembark in various cities and tourist sites around the country.

This week, the new season kicked off. It will focus on Jill Duggar, one of the older girls, and her pending marriage to a ridiculously respectful young man named Derek. This relationship blossomed after a courtship—the Duggar children court prospective mates, they do not date. (As a father of two daughters, this seems far less outrageous than I would have imagined.)

Though it stands to reason that the show is often staged, what I see cuts against many cultural notions we have about family: what children strive for, what parents owe their kids, how a family acts towards one another, what young people are capable of. Considering what we see on TV, it's basically transgressive. A place where homeschooling is treated as a reasonable way to educate your children, where kids talk about "honoring" their parents rather than demanding things from them, and where older kids start successful small businesses without a traditional college education.

I can recall that the shows my children grew up watching almost always featured some bratty kid with an endless supply of snappy comebacks and the ability to outwit all the hapless adults in their lives. Most reality TV I've run across oscillates between depravity and stupidity. 19 Kids and Counting is basically the most earnest show I've ever watched. And while almost any mainstream show I grew up watching saw social conservatives through a political prism—irrational and hopeless—the Duggars' charitable spirit allows people to see the manifestation of religious ideals in real-time. Or so this apostate imagines. In any event, it's almost impossible to not be charmed.

The Duggars lifestyle is completely foreign to me. By any measure, their lives should rub my secular sensibilities the wrong way, and the austerity of their beliefs are still somewhat off-putting. But whether you believe the family's lifestyle is optimal or not—and I don't—you can learn from them. What will most impress any parent is the boundless patience Jim Bob and Michelle have towards their many children. They handle situations with calmness and purpose, focusing on preparing capable adults, but also good people. Which all sounds terribly boring, but it's not. I never imagined that I would ever find myself asking the question "What would Jim Bob do?" … But, well, there it is.

Now, I certainly don't want to be a Duggar, but I have to confess that I want to be more like a Duggar than I am right now. Or maybe I just need a break from all the cynicism. So what?