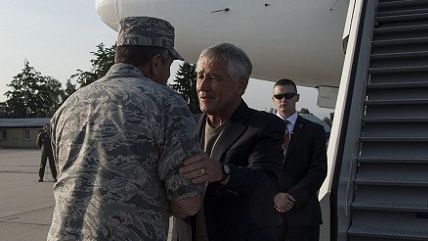 When President Barack Obama denounced the jihadist group the Islamic State that beheaded American journalist James Foley, he called for action "to extract this cancer so that it does not spread." The United States has been bombing its positions in Iraq and may expand the attacks into Syria. This could be the prelude to a bigger U.S. undertaking.

As least that's what our leaders seem to be hinting at. Defense Secretary Chuck Hagel claimed the Islamic State is a threat "beyond anything that we've seen." Joint Chiefs of Staff Chairman Gen. Martin Dempsey called it an "apocalyptic" group that will "have to be defeated."

The hysteria confirms that the U.S. government can turn any enemy into a rampaging Godzilla posing an imminent threat to our survival. In reality, this one is a fringe insurgency with maybe 10,000 fighters who are stretched thin and outgunned by the Iraqi military.