Rand Paul Calls Out MSNBC for Being Dishonest 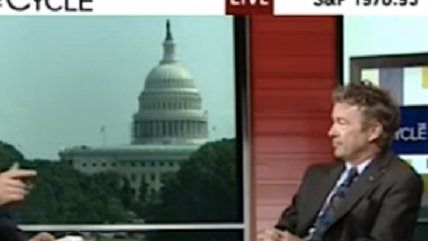 Sen. Rand Paul (R-Ky.) was on MSNBC earlier today along with Sen. Cory Booker (D-NJ) to talk about their joint effort to reform prison sentencing guidelines. Because it's MSNBC eventually the host segued into Paul's comments on The Rachel Maddow Show in 2010, when he explained that while he supported the bulk of the 1964 Civil Rights Act he had some philosophical issues with government telling private businesses  who they could and couldn't bar from their private property. It was among his first media appearances after winning his primary election that year, and led to a firestorm of left-wing-generated criticism. Politicians, after all, shouldn't expect to have honest conversations , especially on partisan outlets.

Paul's learned his lesson. Here was his response to the MSNBC anchor today, via Mediaite:

People need to get over themselves writing all this stuff that I've changed my mind on the Civil Rights Act. Have I ever had a philosophical discussion about all aspects of it? Yeah, and I learned my lesson: To come on MSNBC and have a philosophical discussion, the liberals will come out of the woodwork and go crazy and say you're against the Civil Rights Act, and you're some terrible racist. And I take great objection to that, because, in Congress, I think there is nobody else trying harder to get people back their voting rights, to get people back and make the criminal justice system fair. So I take great offense to people who want to portray me as something that I'm not.

His response shows a healthy dose of combativeness that suggests Paul is readier than he's ever been to mount a national campaign.