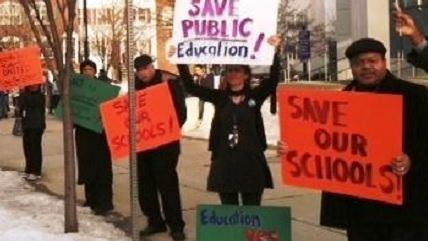 In 2012 the state-run board of education in Newark, New Jersey, unveiled a reorganization plan, "One Newark," that integrated charter schools into the public school system, converting some local public schools to city-wide charters and creating a standardized city-wide enrollment application for participating charters.

Charter schools have exploded in number in Newark since the first ones were opened in the '90s. They provide an opportunity to parents to give their children a better education. I have seen this first-hand living in Newark almost my entire life and as a student and teacher in the public school system there. Charter schools were, and continue to be, popular among Newark parents if not it's political class, which has used the public school system, as it has other public institutions, like a jobs and patronage program.

The One Newark plan was supposed to expand the opportunity for residents to send their children to charter schools. It still is—the plan will continue to be implemented when the school year starts in six weeks. But now the plan has found itself the target of a Department of Education investigation into whether it is discriminatory, because the school closings and moves involved (accompanied by three charter school openings) disproportionately affect black students. That impact shouldn't be surprising—the failures of Newark's public schools system disproportionately affects black students so proposed remedies, to be successful, should focus on increasing the educational opportunities of those same students. The feds and politically-active parents opposed to charter schools seem to disagree.

Jitu Brown, Journey For Justice's national director, framed the school battle as a human rights issue that disproportionately affects African-American families "You will not force failed education policies on our children any longer," Brown said. "We want sustainable community schools, and a world class education for our children regardless of race or economic status."

The Newark district said it will cooperate with the investigation.

"While the initiation of an investigation is a routine matter, we take all allegations seriously," Charlotte Hitchcock, chief of staff and general counsel for Newark Public Schools, said in a statement. "We remain steadfast in our belief that the One Newark plan is not discriminatory and is, in fact, predicated on the goals of equity and excellent educational options for all of our students regardless of race, socioeconomic status or learning ability."

The reorganization has been under fire since it was first presented. Community pushback led to some changes, including a reversal on the decision to convert Weequahic High School to single-sex academies. Hawthorne Avenue, which was supposed to be turned over to a charter, will remain a K-8 district school.

In May, Newark voters elected city councilman and local high school principal Ras Baraka mayor. The victory was hailed by charter school opponents as a mandate for their work because the other candidate was an advocate of charter schools. He was also a weaker candidate. From what I actually saw on the ground in Newark, Baraka's victory had more to do with how much more visible and active he was in the community than his opponent. Since taking office, Baraka has been more focused on bringing more law enforcement agencies into Newark to fight gang violence than schools and has, despite his rhetoric, not made any major moves to scuttle the state's school reorganization plan, a smart move considering charter schools' popularity among actual residents in Newark and not just the professional political and community activists who profit from the status quo.