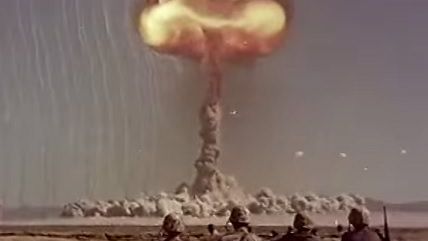 Earlier today a Malaysia Air flight headed from Amsterdam in the Netherlands to Kuala Lumpur, Malaysia was downed over eastern Ukraine, where the Ukrainian military has been fighting pro-Russia separatists. Ukrainian officials say the flight was hit by a surface-to-air missile.

Although it's unclear exactly who was behind the apparent ground-launched missile that destroyed the Malaysia Airlines Boeing 777, US allies who have tried to occupy the middle ground in the worst crisis in relations between Russia and the West since the end of the Cold War may now support bolder action to end the fighting in Ukraine.

"Some people thought Ukraine didn't have anything to do with them. They are now discovering their error," one senior US official said, adding that this could shatter the view in some European capitals that the conflict was largely contained.

Unless the warmongers in Washington and other relevant world capitals get their way, the answer to stuff's question is, No. The last two (U.S.-related) times commercial flights were downed by missiles, the world and its leaders managed to avoid a war. Agendas aside, it shouldn't be difficult to avoid one here either and the push for war kinetic action in the wake of the downed Malaysia Air flight provides a very real world example of what's at stake in the debate over how interventionist U.S. foreign policy should be, a debate that's more prominent in domestic politics now than it has been in years.