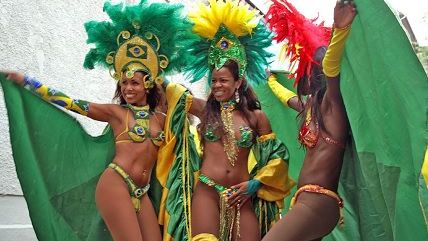 Save one Brazilian goal, today's record breaking high scoring World Cup match between Germany and Brazil (7-1) would've ended with a score resembling a low scoring game of football. Nevertheless, aside from the Brazilian national team's ignominious  defeat—no country has ever lost so badly in a semi-final and although Brazil has five world championships it has for the second time failed to win at home—the tournament appears to be going well, both on and off the field.

Reuters reports that the infrastructure problems predicted before the start of the tournament have not materialized. Neither have the demonstrations seen across the country last summer, which were sparked by a bus fare hike and sustained by protesters' anger over how much money the government was spending on the World Cup. Now Brazil's president, DIlma Rousseff could suffer in the polls, not for her role in promoting government spending but because of the Brazilian team's failure to win. Via Reuters:

Anger and disappointment were so intense that it threatened to darken the national mood for some time to come, with possible consequences for President Dilma Rousseff as she seeks a second term in October.

"This is worse than 1950. It's one thing to lose a game where you suffered and fought hard, and it's another to be completely humiliated," said Fernando Hazzan, 28, in Sao Paulo.

"This game is going down in history, too," he said.

The Brazilian government spent $11 billion on public works alone to host this year's World Cup, and is already preparing to spend even more ahead of the 2016 Summer Olympics to be held in Rio De Janeiro. Brazil will face Argentina or the Netherlands in a match for third will be held in Brasilia, the city the Brazil government built in the 1950s specifically to be its capital, on Saturday.