A Rainbow Whopper Is Exactly What Gay Liberation Is, Actually 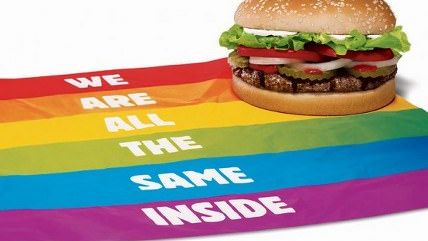 To celebrate gay pride month (technically June, but stuff tends to happen all summer anyway) a Burger King in San Francisco started selling something called a "Proud Whopper." It was just a regular Whopper in a rainbow-colored wrapper. There was nothing different about the burger. Inside the wrapper, a message read "We are all the same inside." We are all delicious hamburgers! No, we're all the same people inside. It was kind of a weird message because most gay folks are "the same" on the outside, too. But anyway. Burger King produced a little video about it and it went modestly viral.

Periodically, whenever a major business takes a hankering to marketing to the gays, there is an outrage, and not just from the religious right. Those guys get outraged about all things gay, lesbian, bisexual, transgender, or even just friendly smiles from straight allies. No, sometimes outrage comes from certain folks on the old guard left who, despite having lived through it, don't seem to have a good understanding of where gay liberation was actually going and are shocked that the parade didn't end with the dismantling of the capitalist economy and full-throated embrace of progressive politics by all gay people.

This time outrage duty fell on Julie Bindel, in The Guardian. The headline and subhead annoy from the very start: "The Proud Whopper? This is not the gay liberation we fought for: The gay community has bought into marriage, babies and big business at huge cost to its radical potential." What radical potential is she going on about?

The gay community used to be defined by politics, but lesbians and gay men no longer share a political base – only, in some quarters, a social one. Rather than meeting on the picket line, we meet on a commercialised social scene, in clubs often owned by straight entrepreneurs, or at the annual gay and lesbian wedding show.

Saying the gay community was "defined by politics" is a bit vague. The gay community was defined because of politics, as in politicians and government force denying gays their rights. She seems to think that the only reason gay activists from the time were considered radical is self-identification. That's nonsense. Certainly many (even most) gay activists like Bindel saw themselves as radical, but it ignores the fact that those with the power—the government, the police, the politicians—cast gays as radicals and dangerous. The government considered the gay person living quietly, peacefully at home just as radical and dangerous (if not more so!) than the ones organizing in community centers and marching on police stations or government buildings.

Because Bindel sees herself as a radical and probably found herself surrounded with similar folks during her life as an activist, she has mistakenly come to a conclusion of what the gay experience is or supposed to be. She seems to think that "radical" and "gay" are supposed to be synonymous:

This deradicalised version of gay life revolves around marriage, babies and mortgages. Many gays have kidded themselves that bigger and richer sponsors for our Pride events and charities means acceptance rather than acquiescence; that it is a sign we are reaching full equality.

But how can we be liberated when there are still daily attacks on gay people, and when the school playground remains, in many ways, hostile to gay pupils? Just last week a YouGov poll, commissioned by Stonewall, found that 86% of secondary school teachers had witnessed homophobic bullying.

Holy crap, those goalposts zipped by so quickly, they left behind a cartoon-style puff of smoke. Gay liberation was once about being treated as equal by the government under the law and not being beaten by police in raids, getting hauled off to jail, getting humiliated in the newspaper, and losing jobs. Now gays aren't liberated as long as some kid is getting bullied? That appears to me to be a definition of liberation that can never actually come to pass. And what does it have to do with Burger King or gay marriage? For that matter, what does it have to do with being "radical"?

It is hardly surprising that we sometimes appreciate being targeted by big business. Gay men, in particular, tend to have more disposable income than their heterosexual counterparts, and while there has been a baby boom in the gay community as a whole, the majority of lesbians still don't have children, so potentially have more money to spend on luxury items such as exotic holidays and expensive clothing.

Even pregnancy and childbirth have become commercialised. In recent years a huge amount of money has been spent by lesbians and gay men on embryos, sperm, IVF and surrogacy services. Now that we are indivisible from straight people – at least those who marry and have children – banks are targeting us to help increase their profits. Last year, a cosy lesbian couple featured in one of NatWest's adverts, showing just how important our spending potential is.

Some will hail all this as a great stride forward, an indication that we are now so mainstream that even banks represent us respectfully. But this is about equity, not equality.

Lesbians and gay men have accepted a fake, highly limited liberation which involves spending and sponsorship, and embraces the notion of inviting church and state back into our relationships (preferably monogamous, with mortgages and babies). In the radical days of the Gay Liberation Front, both lesbians and gay men wanted to abolish marriage, not be invited to join this oppressive, patriarchal regime. As Jill Tweedie wrote in this newspaper in 1971, Gay Lib does not plead for the right of homosexuals to marry, "Gay Lib questions marriage".

I know her questioning of state-controlled marriage will resonate with many libertarians of all orientations, but her definition of what is real liberation and fake liberation is not based on equality or liberty. Her idea of the pursuit of happiness is "the pursuit of what I tell you is supposed to make you happy." Her idea of "liberation" is really about instilling a new orthodoxy, not eliminating it.

And she's entirely wrong to say that what "lesbians and gay wanted" was to abolish marriage. Again, she only sees the community she was directly a part of and not the larger picture—as in, all those gays and lesbians who were still in the closet or who didn't move out to the big cities and were, in fact, never radical.

Guess what? Those gays and lesbians are no longer in the closet. And they are not and never were the radical anti-capitalist, anti-business leftists that certain activists always thought they would be. Burger King is right. Gay people are just like everybody else. And most everybody else doesn't want to abolish marriage or think that the exchange of goods and services is a massive plot to keep us all down. She continues:

What would real gay liberation look like? Marriage would be abolished for all in favour of something based on equality and next of kin rights rather than ownership and tax avoidance. Gay men and lesbians alike would challenge a culture and politics based on consumerism, and would speak out against the misogyny that confines both groups to stereotypes. And we would look beyond the picket fence and rejoin the picket lines in protest about the ongoing oppression and anti-gay bigotry we still face, despite legislative equality.

This isn't "gay liberation." This is the answer to the question, "What does Julie Bindel think gay people should believe in?" Because the larger gay population does not (and probably never did) share Bindel's larger values, she doesn't grasp that there has been no selling out. This is what many wanted all along. The label of "radical" was forced on everybody included in the LGBT acronym by the state. It didn't mean everybody saw himself or herself that way. Bindel's failure to grasp that we don't all share the same goals or politics and never did pushes her into this space of denying the agency of gay people everywhere. We've been "sold a dream of marriages and babies" as though it we didn't actually want it. We were tricked by evil banks and businesses!

But it's simply not true. Freedom means gay people can decide what sort of relationships they want. Those who always dreamed about getting married can have those dreams. Those who don't want to embrace the state's classification of relationships don't have to. That's liberation. What Bindel cannot grasp that being gay is not radical, despite the fact that this was the argument coming from the gay and lesbian community for decades now. She asks, "What happened to that early radicalism?"

We won. That's what happened.