Your Flag Bikini Is Tacky and the Feds Hate It (But It's Legal!) 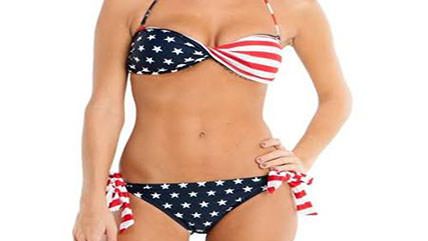 That red, white, and blue T-shirt you plan on wearing tomorrow, the stars and stripes napkins for your BBQ, even that tacky flag bikini—the government doesn't think those things are as awesome as you do.

In fact, the government fashion police have an entire code to tell you that mostly every flag design you'll be wearing or using tomorrow is disrespectful. And you thought you were being so patriotic.

The flag should never be used as wearing apparel, bedding, or drapery.

The flag should never be used as a receptacle for receiving, holding, carrying, or delivering anything.

No part of the flag should ever be used as a costume or athletic uniform.

The flag should never be used for advertising purposes in any manner whatsoever.

It should not be embroidered on such articles as cushions or handkerchiefs and the like, printed or otherwise impressed on paper napkins or boxes or anything that is designed for temporary use and discard.

But don't worry, the code is more what you'd call guidelines.

While wearing the colors may be in poor taste and offensive to many, it is important to remember that the Flag Code is intended as a guide to be followed on a purely voluntary basis to insure proper respect for the flag.

But the code hasn't always been voluntary. In 1932, flag protection laws appeared in the books of all 48 states. (Alaska and Hawaii were not admitted into the Union until 1959.)

The first flag protection laws were created in response to a nationwide campaign to squash the commercial use of the flag.

Then in 1968, Congress passed the first federal flag-protection in response to protesters burning and destroying the old star spangled banner at anti-Vietnam War demonstrations.

It took the Supreme Court more than two decades later to declare that law and all state flag-protection laws unconstitutional for violating the First Amendment.

Wear your flag suit with pride, fellow patriot. It's your First Amendment right to do so. (But it's still tacky.)