Ann Coulter Doesn't Like Soccer, Because Liberals and Immigrants Do 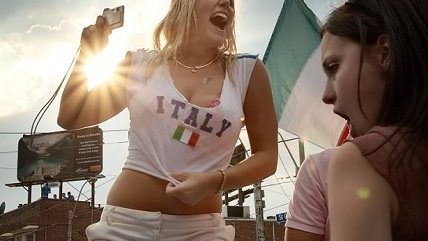 Conservative commentator Ann Coulter's latest column pokes fun at soccer for being a lame sport enjoyed by liberals because, she believes, no one gets hurt, there are no individual successes, and a lot of matches end in scoreless ties. The last observation is difficult to dispute, but the first two are on flimsier ground. She points out in football there are few scoreless ties even though it's "a lot harder to score when a half-dozen 300-pound bruisers are trying to crush you." I suppose it's all a matter of perspective. I've heard rugby fans, for example, scoff at how dull football is, and despite Coulter's romanticized notion of it, like most things American football seems to be becoming about safety first too.

Nevertheless, Coulter chose a fun, newsy topic and hooked it in to her wheelhouse—conservative horror at the changing world around them—so good for her. I'm not going to defend soccer point by point from her column. Soccer doesn't need it, I don't need it, and you don't need it. I did, however, find this kicker about soccer and immigrants interesting:

If more "Americans" are watching soccer today, it's only because of the demographic switch effected by Teddy Kennedy's 1965 immigration law. I promise you: No American whose great-grandfather was born here is watching soccer. One can only hope that, in addition to learning English, these new Americans will drop their soccer fetish with time.

It's a stunning bit of historical illiteracy—if your grandparents were born 100 years ago, they could well have been the children of the generation of immigrants that at the time were flooding into this country from Europe. That wave of European immigration actually helped soccer become quite popular in the U.S. in the early 20th century. In fact, a mostly-amateur team consisting of six players born in Great Britain took the USA to third place in the 1930 World Cup, the first World Cup and to date America's best finish in the competition. The French called the American team "shot putters" because of how bulky the players were—sounds pretty "American" to me.

Immigrants today may look different than the ones a hundred years ago (although "race theorists" of a hundred years ago often tried to differentiate southern Europeans from their less recently settled in the U.S. northern European kin), but they're largely interested in the same things—building lives, families, and businesses in the U.S. And following soccer. It shouldn't be a surprise that a nation made up of immigrants remains influenced by each successive generation of it.

Ann Coulter wisely kept her soccer comparisons to football, invented in the Ivy League (liberal elite alert!), and avoided invoking that great American pastime of baseball. Baseball itself, of course, was brought to the U.S. from England by an even earlier wave of immigrants than the ones that helped produce America's most successful World Cup team ever. With America it's immigrants all the way down.