Iraq Is a Terrible Place to Succumb to Sunken Costs Fallacy 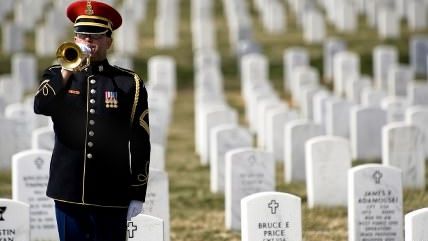 When they say "The first casualty of war is truth" (source: nebulous, but often misattributed to Aeschylus), we may tend to assume the public's trust is what's being slaughtered in the justifications for war. But let's not forget how misguided foreign wars like our misadventures in Iraq sold the same lies to the men and women who actually put their lives on the line in the military.

As the slow collapse of Iraq that has actually been happening for months has sped up this past week, media outlets headed out to capture the certain non-plussedness of veterans who served rotations there. Yes, there's bitterness. We've certainly heard about it before, but it's getting another airing given the current situation. Here's The Boston Globe:

"I'm not surprised that this is happening. I think it was somewhat inevitable," said Chris Lessard, a 36-year-old Newton firefighter who was a Marine machine-gunner in Iraq from 2004 to 2005. "But to see it's been pretty much handed over, it's disheartening."

Lessard said he believed in the US mission while he was fighting in Iraq, based near Fallujah. But now, with the Iraqi Army in disarray and Sunni and Shi'ite unable to work together, Lessard does not want the United States to reenter a centuries-old conflict that massive amounts of American money and military force could not resolve.

"This is Iraq's problem now," Lessard said. "I don't think we should even give them one round of ammunition. They need to govern."

Not every Iraq veteran is able to look back now and accept that the we are not the ones who will fix the country's mess. The Detroit Free Press found veterans who insisted that the United States must do something to help Iraq:

[Christopher] Kolomjec said there are no easy answers to the current situation. He said U.S. forces long struggled to win the support of the Iraqi people because they knew the Americans would eventually leave and the insurgents would remain. But the U.S. can't ignore the situation.

"The one thing we can't do is nothing," he said. "You can't just turn your back on them."

Kolomjec said he thinks the U.S. should provide air support to the Iraqi army as it attempts to hold off the insurgents, but putting American troops on the ground is a much more difficult issue.

"I don't think this country right now has the stomach for ground troops. That's my impression," he said.

I would argue that it's not the stomachs telling Americans no, but their heads. Despite the absurd arguments from the war-drum crowd that we needed to spend even more time in Iraq, we know that's not a rational response. The Iraqis are not children, and their factional issues are theirs to deal with, not ours. Additional actions in Iraq not only would cost more money that we really can't afford, but any sort of military action (even absent ground troops) can risk American lives. The perfectly reasonable resistance to further military action is a reflection of the grasp of sunken costs in Iraq. The trillions of dollars spent in Iraq and the loss of American lives and the permanent injuries so many have suffered didn't liberate the country. There is no rational reason to believe that additional actions will result in a better outcome.

I can't even fathom what it must feel like to be in the position of these veterans, to have lost arms, legs and friends in Iraq and to watch what's happening now. But we can't turn lies (the reasons for the Iraq war) into something noble by continuing to throw money and people at Iraq to "fix" it. I don't know how to fix the pain, emotional and physical, veterans must feel over Iraq's crumbling, but I do know that we can't make it better by spreading that pain to even more veterans. That would be the likely outcome of additional military action in Iraq.