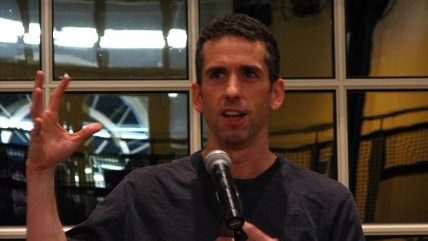 Well known gay author and advice columnist Dan Savage recently spoke at a University of Chicago Institute of Politics seminar. Some students who attended the event denounced him for repeatedly using the word "tranny," which made one transgender person in the audience feel uncomfortable and "unsafe." According to The Chicago Maroon:

The incident occurred when, according to several sources, Savage and [IOP fellow Ana Marie Cox] began discussing his personal history as a gay man. According to a first-year student and member of the LGBTQ community who asked to be identified as Hex, Savage used the slur t—– as an example in an anecdote about reclaiming words. Cox then added, "I used to make jokes about t—-ies," audience members recounted.

"That was one of the most hurtful parts," Hex said, explaining the perceived insult was that Cox used the slur to refer to the group of people she joked about. "In that context, it was like being applied to all transgender people," it said. ("It" is Hex's chosen pronoun.)

In a statement, the IOP said, "A guest used language that provoked a spirited debate. The speaker was discussing how hurtful words can be repurposed and used to empower; at no point did he direct any slurs at anyone."

Hex asked Savage and Cox to use the term "T-slur" instead of the actual word. According to second-year Sara Rubinstein, an executive director of QUIP (Queers United in Power), and Hex, Savage then named other slurs, asking if they were suitable to use instead. "Obviously [he attempted] to threaten me and make me feel uncomfortable in that space, which was pretty successful," Hex said.

By all accounts, Savage made no deliberate effort to threaten or perturb the student. Maroon columnist Anastasia Golovashkina investigated the accusation and determined that what transpired was nothing more than a dialogue over the acceptable uses of words like "tranny." And though Hex claimed that Savage and Cox repeatedly interrupted it, multiple students told Golovashkina that Hex was the one doing most of the interrupting.

Nevertheless, an activist started a Change.org petition to pressure IOP to issue some sort of condemnation of Savage. The petition also demanded that the University of Chicago vigorously police usage of "hate speech" in the future.

Ironically, Savage's entire purpose for bringing up the word was to discuss strategies for overcoming its negative and hurtful associations.

There is of course no better way to reaffirm a word's evil power than by making it unsayable. Many students, unfortunately, have committed themselves to the mindset that everything that bothers them should be banned—or at the very least, should come with a warning label so that they may avoid ever encountering a troubling word or concept.

I would say that people who feel existentially threatened by language itself need to get over themselves, but I would probably be accused of hate speech.