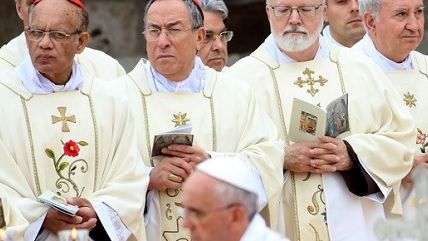 Cardinal Oscar Rodriguez Maradiaga, a top adviser to Pope Francis, attended a conference on "The Catholic Case Against Libertarianism" and, surprise!, came out against libertarianism. The native Honduran, you see, thinks he and Pope Francis, formerly an Argentine cardinal, know all about free markets. Why? Because they grew up in the midst of them. The pope, Maradiaga argued, "has a profound knowledge of the life of the poor" in part because he grew up in Argentina.

The two may be well-meaning but are profoundly ignorant on economics and the kinds of policies that actually alleviate poverty, as opposed to the policies that claim to do so while allowing its proponents to amass more power and demonize their opponents. Argentina is a land of "too many messiahs," in the words of Jorge Luis Borges, which The Wall Street Journal quoted in explaining how Argentina was a sort of paragon for crony capitalism. State capitalism, of course, is not about free markets but about government control and manipulation of markets for the benefit of the politically connected. Sadly, it's a condition far more prevalent around the world than any actually existing free markets.

Were the cardinal, and the pope's other advisors, interested in seeking the truth rather than assuming it, they might come across and critically engage the idea that free markets, and libertarian leanings, have helped lift billions out of poverty. The Catholic church has certainly not done so, either historically or contemporaneously. Indeed, no matter how benevolent or well-intentioned the institution, central planning is not an effective way to combat poverty. Maradiaga says that the pope insists on the "elimination of the structural causes for poverty." If so, he should embrace free markets, which have the power to do so without relying on the oft-misguided and easily appropriated wisdom of men, and reject books like Thomas Piketty's (which Maradiaga praised) that subordinate the truth in favor of pleasant propaganda. Social justice is supposed to be about speaking truth to power. John F. Kennedy, America's first Catholic president, once suggested that the basis of human morality was the ability to "stand against the flow of opinion on strongly contested issues… in spite of personal consequences, in spite of obstacles and dangers and pressures." Parroting mainstream anti-free-market opinion in the service of accumulating temporal and material power is quite the opposite.