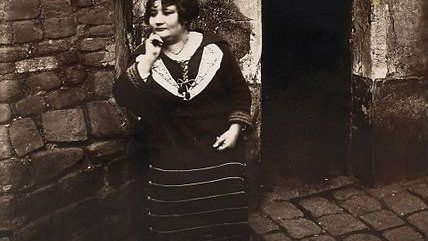 Today is "International Whores' Day," a day commemorating the 1975 occupation of the Church of St. Nizierof in Lyon, France, by more than 100 prostitutes. The event is considered to be the birth of the modern sex workers' rights movement.

Here's a good summary of the sit-in from the blog Prized and Reviled:

On the 2nd of June in 1975, around 100 street-based sex workers decided they'd had a gutful of police being more interested in harassing and arresting them, than in solving murders and other crimes committed against them. They took over a church and staged a sit-in, in protest.

As the days wore on, the police became more and more impatient. Instead of attempting to negotiate with the sex workers and resolve their issues, the police just threatened them with increasingly harsh penalties. When the protesters still showed no sign of backing down after a full week in the church, the police announced that they were going to have the sex workers' children removed from their homes.

So, that's awesome, right? Only sadly, after a few days, police did what they do and busted in with some batons. The protest ended with the women being arrested and beaten. But many of the Lyon sex workers had their fines written off; legit police investigations into unsolved sex worker murders were launched; and the event sparked similar protests in Marseilles and Paris.

Maggie McNeill of The Honest Courtesan explains the significance of International Whores' Day to the sex worker community:

As I've explained before, there are three major days observed by sex worker rights activists: the Day To End Violence Against Sex Workers (December 17th, the anniversary of the 2003 sentencing of the Green River Killer); Sex Worker Rights Day (March 3rd, the anniversary of a 2001 festival in Kolkata attended by over 25,000 Indian sex workers despite efforts from prohibitionist groups who tried to prevent it by pressuring the government to revoke their permit); and today, Whores' Day. … In a very real sense, today is the birthday of the sex worker rights movement; though Margo St. James had already founded [sex worker rights organization] COYOTE two years before, the French protests were the first ones large and vociferous enough to gain media attention, and led to the formation of the French Collective of Prostitutes (which in turn inspired the founding of the English Collective of Prostitutes and a number of other, similar organizations). And had its growth not been stunted by the unwelcome arrival of AIDS (and its attendant demonization of anything sex-related), decriminalization might very well have been the rule among advanced countries by now rather than the exception.

For a brief time, St. James and sex workers' rights activists were able to win support from mainstream feminists, including the National Organization for Women. That didn't last for long (though I'd argue younger feminists today are trending back toward supporting sex work decriminalization). In a paper comparing French prostitute protest movements in 1975 and 2002, sociologist Lilian Mathieu notes that the earlier protest movement "immediately garnered broad support from the feminist movement." In its later incarnation, however:

Not only did a majority of feminists refuse to support the prostitutes' cause on the second occasion, but the focus of debate shifted from challenging police repression to a controversial debate about the very existence of prostitution itself, and about the legitimacy of the people who practice this "profession" to enter as such in public debate.

These days, McNeill writes, "the most outspoken and effective activism in the world is being done by the sex workers in … India, Bangladesh, Korea, Cambodia and Thailand," as well as in African countries such as Kenya, Malawi, South Africa, and Zimbabwe.