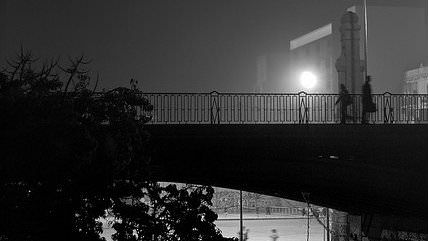 Why do we trust strangers? Perhaps we don't in any meaningful way. A new psychology study suggests that placing trust in strangers may be more a function of feeling morally or socially obligated to do so than genuinely believing them to be trustworthy. We "trust" so as not to disrespect someone's character, the researchers say.

"Trust is … vital between strangers within social groups who have no responsibility toward each other outside of a single, transitory interaction," said lead study author and Cornell University professor David Dunning, citing eBay and farmer's markets as examples.

"We wanted to examine why people, even those with low expectations of others, tend to trust total strangers more often than not."

The researchers recruited a total 645 students—about half from Cornell and half from Germany's Cologne University—for a series of trust experiments. The results, published in the American Psychological Association's Journal of Personality and Social Psychology, suggest trust between strangers is less rational judgement call and more norms meet neuroticism.

"Trusting others is what people think they should do, and emotions such as anxiety or guilt associated with not fulfilling a social duty or responsibility may account for much of the excessive trust observed between strangers every day," said Dunning.

In one trust game (a variation on one from behavioral economics studies), participants were given $5 and two options: keep the $5 or give it to an anonymous stranger. If they chose to give, the sum would be increased to $20 and the recipient could keep the whole $20 or give $10 back to the first person for being a good sport. Participants were also asked to rate how choosing to give versus keep the $5 would make them feel and whether they thought they should do so.

A clear majority (71 percent) decided to give the $5 to the stranger—a number far greater than would be expected based on students' expectations of peers returning the money, researchers note. Not surprisingly, those who felt they should trust the stranger to kick back some cash were more likely give them the $5, even if they didn't necessarily want to do so.

In another experiment, participants faced a similar setup, but this time the recipient of $5 would flip a coin to determine whether some of the money was kicked back. When the outcome was based on chance rather than trust, only about 44 percent gave the $5 away.

In the first experiment, "participants wished to avoid showing disrespect for the moral character of their interaction partner," the researchers concluded. "When we removed the issue of the partner's character by making the partner's response depend on a coin flip rather than on an intentional choice, participants were much less willing to make themselves vulnerable to the other person."