David Cameron Was Right When He Called the U.K. a 'Christian Country' 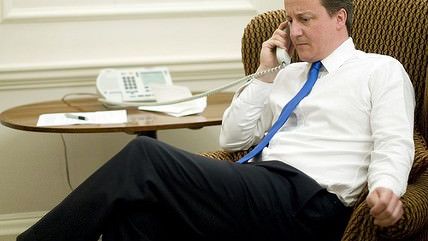 British Prime Minister David Cameron has caused a minor controversy in the U.K. by writing in the Church Times that "I believe we should be more confident about our status as a Christian country." After the article was published, 50 public figures signed a letter to The Daily Telegraph objecting to Cameron's article, saying:

Apart from in the narrow constitutional sense that we continue to have an established Church, Britain is not a "Christian country". Repeated surveys, polls and studies show that most of us as individuals are not Christian in our beliefs or our religious identities.

Unlike the American president, the British head of state (Queen Elizabeth II) is the head an established church (the Church of England). However, as the signatories of the letter to The Telegraph rightly point out, most Britons "are not Christian in our beliefs or our religious identities."

As the chart below from The Washington Post—based on 2011 British census data—shows, almost 60 percent of Britons identify as Christian, and a little over 25 percent are not part of a religion.

The Washington Post goes on to mention that according to the results of the 2013 British Social Attitudes Survey, 48 percent of Britons did not belong to a religion. In 2013, the Church of England said that church attendance rates were "stabilising" after years of decline, with 1.1 million attending weekly services in 2011. The U.K. has a population of almost 64 million. The British Humanist Association claims that many Britons identify as religious for cultural reasons, not because they believe in religious metaphysical claims.

While it might be the case that the British are not very religious, it is hard to deny that the U.K. and its institutions are drenched in religious history and culture, as Harry Cole explained in The Spectator:

Leaving aside the fact that 59% of the UK population self-defines as Christians, we need only look at our institutions and state structure to see how bizarre this row has been. England has an established church. English bishops sit in our Parliament. A glance around the rim of our £1 coin will show you that our Head of State has another far more interesting title – Defender of the Faith. The Left weren't so snooty about the Archbishop of Canterbury, our state-declared spiritual leader, when he was defending foodbanks.

We have a constitutional framework, legal system and legislature that is built around Judeo-Christian values. Almost every single bank holiday we have in this country is to mark some sort of Christian festival. Tens of thousands of children are educated every day in church-supported schools, and what is the first word of the national anthem again?

The British may not be a particularly religious bunch, especially compared with Americans, but they undoubtedly live in a Christian nation.