Protests in China Continue Over Medication of Kindergarteners Without Parental Consent 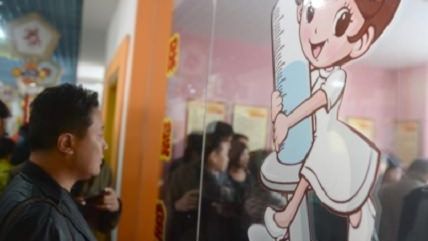 Earlier this month, the Chinese government ordered a nationwide investigation into allegations that kindergarten schools in several provinces were treating their students with anti-viral medication. Authorities say the dispensing of medication could be part of an effort to boost attendance, which is apparently tied to revenue at the schools. The "president" of at least one kindergarten school that spurred the investigation admitted to dosing students with over-the-counter anti-fever meds as well as vitamins. Protests continued this week amid revelations that kindergartens in yet another province may have been medicated without parents' consent. According to lawyers for the parents involved, there are no laws prohibiting administering medication to students without parental consent, something parents and their attorneys say they want to see as a result of the crisis.

Even while admitting official statistics show 91 percent of kindergartens in one province as "private," the state media agency Xinhua has used the crisis to attack private schools:

The official statistics show that Guangxi has 7,554 kindergartens, 6,900 of which are private. Of these, 4,000 plus are operating without licenses. With poor infrastructure, unqualified teachers and shortcuts on safety, many private kindergartens are nothing more that sources of profit for their owners and wholly neglect their fundamental function as educational institutions, Yuan said.

The number of unlicensed private kindergartens seems to be a direct result of a lack of alternatives in preschool education. "The authorities did not expect so many preschool children decades ago. They failed to make a long-term plan for expansion of kindergartens," said Xiong Bingqi, deputy head of the 21st Century Education Research Institute.

Exactly how private the schools in a nominally communist country really are is difficult to ascertain, and there is no specific reporting on the public/private identification of each of the schools accused of medicating their students. Tying revenue to attendance isn't common among private schools in the West and doesn't seem like it would be a smart arrangement in Chinese private schools either. Schools need the ability to budget on a year-to-year basis based on expected tuition revenue. It doesn't make business sense to tie that revenue to student attendance, because most of the underlying costs of educating that student don't appreciably decrease with lower attendance. Yet what makes sense in a private school in China could be very different because of the way the government constricts and distorts whatever private education market might exist there.

Tying attendance to revenue sounds a lot more like a strategy that would be deployed in government-funded schools, where the government could point to high attendance rates as a success. Nevertheless, the South China Morning Post comes closest to explaining the phenomenon by reporting that at nursery schools "absent pupils don't pay fees."

According to the blog Dongbei Daishu, private schools in China re-emerged in 1992, having been obliterated after the communists took over in 1949.