Given the technology's increasing proliferation, learning from mistakes and addressing real harms is not just the best thing the FAA can do, it may be its only option. 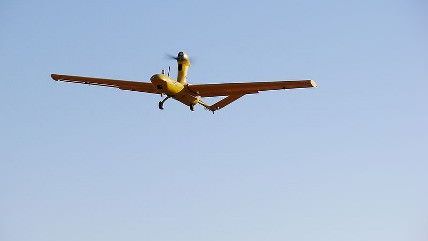 Feinstein said she had first-hand experience with the things, recalling the time Code Pink flew a drone around her house.

"I'm in my home and there's a demonstration out front, and I go to peek out the window and there's a drone facing me," she said. "Well, whoever was running it turned it around quickly and it crashed."

By all accounts, the "drone" Feinstein saw was a Lady Sky Invaders Pink Patrol RC helicopter available at your local toy store for $17.95. Still, it makes a good anecdote to tell when you're calling for the regulation of commercial drones—the kind used by film-makers, journalists, and real estate agents to get inexpensive, high-quality aerial photography.

According to Feinstein, we need regulation before drones are allowed to take to American skies. She says that what regulators must consider is, "When is a drone picture a benefit to society?"

And there's the rub. For many, it is entrepreneurs who must first demonstrate that new technologies are beneficial to society before they are allowed to use them. It's an inversion of a basic tenet of liberty that has served common law countries well: everything which is not forbidden is allowed. It is regulators who should prove that a technology causes real harm before restricting its use.

Feinstein is concerned about the potential effect of drone technology on privacy, and argues that we may need "some specific regulation on the kinds of uses it can be put to." But peeping tom laws already make it illegal to invade someone's privacy, whether you use a drone or not.

Others, like the FAA, are concerned about safety, and have tried to ban the commercial use of drones without special permission from the agency. Last month, it told a Detroit flower shop to cease and desist from its plans to make Valentine's Day deliveries via drone. Weeks before that it put the kibosh on Lakemaid Beer's plan to use drones to deliver 12 packs from its brewery to ice fishers camping out on Minnesota's frozen lakes. And just last week, the FAA told the Washington Nationals to quit using drones to film its players.

Of course, someone like Sen. Feinstein might ask, what's the benefit to society of beer or flower delivery? It's the wrong question to ask, but the answer is experimentation and the innovation that flows from it. By trying to take commercial use of drones off the table, the FAA is seriously hampering American ingenuity in order to guard against largely theoretical privacy and safety harms—and that has real consequences.

According to an AP investigation, while the U.S. has traditionally dominated the aviation industry, it is beginning to lag globally because it is not embracing the next stage in flight's evolution. In Japan, Australia, the UK, and UAE, drones are being used by commercial enterprises for everything from deliveries, to crop dusting, and energy plant inspections. Seeing the writing on the wall, Congress in 2010 passed a law ordering the FAA to issue rules making drones legal for commercial use by 2015. Yet the agency says it won't meet the deadline.

For one thing, a federal administrative law judge just ruled that the FAA's ban on commercial use of drones had never been enacted through the required notice-and-comment process, and he threw out a fine the agency had assessed against a prolific aerial photographer. The FAA is appealing, but there's a very good chance it won't prevail.

Another challenge the FAA faces has nothing to do with the law: How do you enforce a prescriptive rule on what will soon be thousands of small drone operators? Indeed, it may be the agency already recognizes the practical limits to its powers and that is why it quickly cracks down on any commercial drone use that challenges its authority. It likely knows that if just a few uses go unwarned or unpunished, the levee might break, and then the fact that the technology has changed what laws can be enforced will be laid bare.

Rather than fight against the tide, the FAA should see its recent legal setback as an opportunity. After all, it's under a congressional mandate to normalize commercial drone use. If it loses its appeal, what's it going to do? Begin a process to ban commercial drone use before it has to legalize it again?

Instead of insisting on a policy that requires permission before small drones can fly commercially—permission the FAA has only granted once—the agency should recognize that drones can be put to for-profit use legally and unleash a wave of permissionless innovation.

Bad things will no doubt happen along the way, but we will learn from mistakes and accidents. Given the technology's increasing proliferation, learning from mistakes and addressing real harms is not just the best thing the FAA can do, it may be its only option.

Jerry Brito is a senior research fellow at the Mercatus Center at George Mason University and director of its Technology Policy Program. His recent book is Copyright Unbalanced: From Incentive to Excess.