Rutgers Faculty Upset at Condoleezza Rice Invitation to Graduation —Will They Oppose Barack Obama's Too?

In defense of speaking to 21 year olds 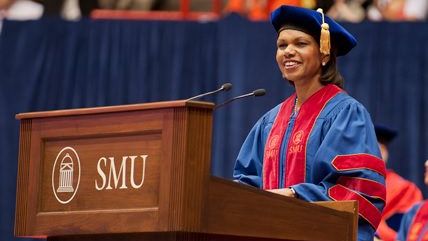 The faculty council at Rutgers University in New Jersey is upset the school invited former Secretary of State Condoleezza Rice to deliver the commencement address in May, and to receive an honorary doctorate, passing a resolution calling on the university administration to rescind it. The Star-Ledger reports:

[T]he faculty council cited her war record and her misleading of the public about the Iraq war as reasons for their opposition.

"Condoleezza Rice … played a prominent role in (the Bush) administration's effort to mislead the American people about the presence of weapons of mass destruction," according to the resolution. And she "at the very least condoned the Bush administration's policy of 'enhanced interrogation techniques' such as waterboarding," it said.

"A Commencement speaker… should embody moral authority and exemplary citizenship," it continued, and "an honorary Doctor of Laws degree should not honor someone who participated in a political effort to circumvent the law."

The measure was introduced by a chemistry professor who said students were also concerned.

Misleading the American people? Participating in a political effort to circumvent the law? Condoleezza Rice has a long career in academia and policy making, and her life stories can certainly provide some kind of inspiration and even direction for graduating seniors, the role of a commencement speaker. Iraq was a major policy blunder, one that cost the U.S., and Iraq, too much blood and treasure. And the Bush White House, for whom Rice served, is certainly guilty of a gross expansion of the powers of the executive branch, including waterboarding and other potential war crimes. Whether that precludes Rice from speaking to twenty-one year olds being sent out to the real world after spending four to six on a piece of paper isn't necessarily obvious.

Being a hopeless pessimist, what does seem obvious to me is that the faculty council is being driven not by any moral compass but by partisan concerns. They can prove me wrong. New Jersey's congressional delegation is lobbying for Barack Obama to accept Rutgers'  invitation to speak at the 2016 commencement. Will the faculty condemn this invitation too? Obama, like Rice, and more so as the head of the executive branch, is also responsible for Bush school war and terror policies, misleading the American people, and attempting to circumvent the law. Arguments that would support Obama speaking to graduating seniors but not Rice are highly unlikely to be intellectually rigorous or anything more than partisan apologetics.