Codgers Freaking Out Over Millennial Texts, Twerks, and Video Games

I wish outraged oldsters remembered how we once laughed at those who were frightened by Elvis Presley. 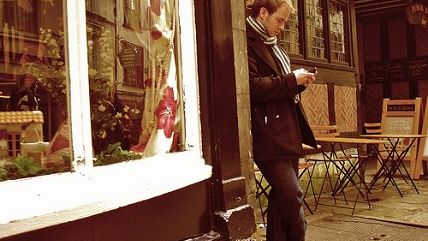 America's most popular cable news host is upset. "Marijuana use, video games and texting (are) creating major social problems," says Bill O'Reilly. "This is an epidemic that will lead to a weaker nation!"

Give me a break. Crotchety old geezers always complain about "the kids." The Boston Globe frets about "Idle Trophy Kids." The New York Post asks if millennials are "The Worst Generation?" Older folks (my age) complain that young people spend so much time texting each other that they can't communicate. And because young folks spend hours playing violent video games, violence is up.

It's true that kids today play incredibly violent games like Halo and Grand Theft Auto, but as the games' popularity increased over the past 20 years, youth violence dropped 55 percent. In Japan, kids spend more time playing violent games, and there's even less violence. And in America, despite media hype, there are fewer school shootings now, not more.

Kids "can't communicate" because they text all the time? Recently, kids invented Facebook, YouTube, Firefox, Groupon, Instagram, Tumblr, Pinterest, and so on. They communicate something. But inevitably, we older people misunderstand new ways young people do things—we are frightened by the risks and oblivious to the benefits.

If O'Reilly had been on TV in the '50s, he would have ranted about comic books causing juvenile delinquency. The Senate actually held hearings in which the public was instructed that Superman "embodied sadistic fantasies … injurious to children."

Today O'Reilly opines, "The cyberspace addiction rate among American children is off the charts … they don't learn coping skills! … In China, young people are encouraged to compete, be disciplined, live in the real world. Not here."

Even if that were true, what have Chinese young people invented lately? Any companies? What music and art did they compose?

O'Reilly worries about "America going to pot … If you use any intoxicating agent, your goal is to leave reality. You're not satisfied with your current state of mind, you want to get high, buzzed, blasted, whatever."

I say, so what? Some people like the sensation of getting "buzzed." Some are not satisfied with their current state of mind. Good. That's what gets people to learn new things.

Altering our minds is a most basic right. We alter our minds—often for the better—every time we read a book, fall in love or watch a TV show, including O'Reilly's.

But old people worry that young people are exposed to sexual imagery. It's true the Web brings pornography to children's computers, and that culture is often coarse. When Miley twerks, I cringe.

But again, where's the harm? As reporter Michael Moynihan will point out on my TV show this week, "Over the past 20 or so years, sex has been in everyone's face, yet teen pregnancy dropped by 50 percent."

I wish outraged oldsters remembered how we once laughed at those who were frightened by Elvis Presley. In 1956, The New York Times said Elvis had "no discernible singing ability." The New York Daily News called his act "animalism that should be confined to dives and bordellos." Even Frank Sinatra said his kind of music is "deplorable, a rancid smelling aphrodisiac (that) fosters destructive relations in young people."

"Moral panics are one of our favorite things," says Moynihan. "If there's nothing to be panicked about, what do you write about?" Being outraged is part of the media circus.

The danger is that the outrage undermines perspective. It creates a false impression of how risky the present is, and it fuels unnecessary, freedom-killing regulations.

Today, thanks to the Web and other innovations, life is better, not worse.