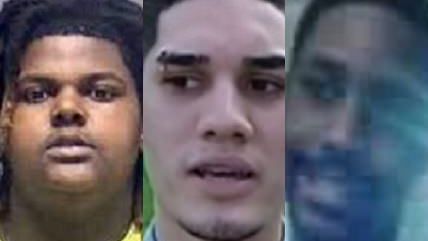 East Lee County High School in Florida has a zero tolerance policy on fighting. It doesn't matter who started it or who may have tried to stop it, if you're in a fight at school, you get suspended. In the case of Mark Betterson, a student at the high school, he received a 10-day suspension because, he says, he stepped in to stop a gay student from being bullied. Via the Gay Star News:

'I was just trying to break up the whole thing because its not fair for somebody to get beat up for something that he is. That's not really called for.'

Betterson said he had only gotten physical when Griffin had begun throwing punches at him too.

'He swung at me and was like you can get it too so we got into a fight,' Betterson said.

Betterson said he understood the school's policy but thought that 10 days suspension was unfair when all he was trying to was protect another student.

The student who allegedly started the fight, James Griffin, an 18-year-old, wasn't just suspended for 10 days. He faces battery charges after sheriff's deputies reviewed surveillance video of the fight, which they say corroborated what the bullied student, Jonathan Colon, told them. Betterson said he'd do the same thing again, fearing Colon would have suffered more injuries without his intervention, but still wishes the penalty were less severe. As for Colon, who said he wasn't friends with Betterson before the fight, he said he was surprised Betterson stepped in to help. "I was protected by someone who had no reason to protect me, we have nothing in common – he's on the football team and I'm the flamboyant gay boy," he told a local TV station.

The state of Florida has a stand-your-ground law that is supposed to protect the right to self-defense. It doesn't require a "duty to retreat," keeping that claim out of the toolbox of overzealous prosecutors. But, as with other rights protected by law, or even the Constitution, education administrators would prefer they didn't apply in school.