Kim Jong Un Reportedly Feeds Uncle to Starving Dogs; Is There Any Other Kind in North Korea?

Unconfirmed, implausible report nevertheless could only be true coming out of North Korea 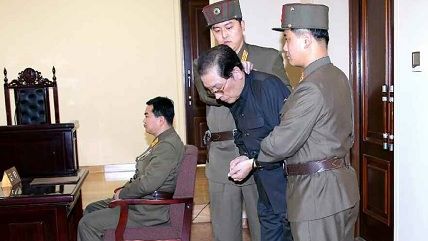 The latest (unconfirmed, natch) news from the nightmare on earth that is North Korea relates to the disposition of Kim Jong Un's uncle (the husband of his father's sister), a high ranking official in charge of relations with China who was branded a traitor to the regime and executed. An unsourced December report from a Hong Kong newspaper that nevertheless has ties to the Chinese Communist Party claims Kim's uncle was executed along with several of his aides by being fed to 120 starving dogs. NBC News picked it up today:

Hong Kong-based pro-Beijing newspaper Wen Wei Po reported that Jang and his five closest aides were set upon by 120 hunting hounds which had been starved for five days.

Kim and his brother Kim Jong Chol supervised the one-hour ordeal along with 300 other officials, according to Wen Wei Po. The newspaper added that Jang and other aides were "completely eaten up."

Over at the Washington Post, Max Fisher points out the story is probably (probably!) not true, explaining that Wen Wei Po isn't a pro-Beijing source in the same league as say, Xinhua, which has not reported on the execution by dogs, and that no South Korean news agency has picked it up despite the incentives to verify and disseminate the story.

The European cable news network euronews meanwhile, suggests that if the story is not true, it was fabricated either by Beijing or Pyongyang, although it certainly could've also been fabricated by the Hong Kong newspaper itself.

As Fisher and euronews both highlight, however, North Korea's own self-imposed isolation makes it impossible to verify a story like this, while its history of brutality and horror make it impossible to dismiss an otherwise insane story with certitude. Kim Jong Un has ordered the execution of many high-ranking North Korean officials already in an effort to consolidate power since taking over when his father died just more than two years ago. The public manner in which his powerful uncle, Jang Sung-Taek, was denounced as a traitor and stripped of his positions was certainly unprecedented, while Kim's desire to see an enemy executed in a way so that "no trace of him" was left behind is not. South Korean media reported a few months ago that Kim ordered an army minister be executed by mortar fire to achieve just that result.