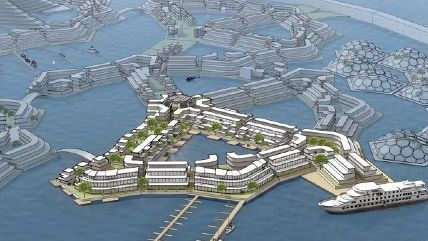 When it comes to large numbers of people living in close proximity to the ocean, few people can beat the Dutch for experience. So, it makes sense that a Dutch engineering firm, DeltaSync, which specializes in "floating urbanization," was hired by the Seasteading Institute to develop initial plans for habitations at sea that would be safe, practical and meet the institute's goal "to guarantee political freedom, and thus enable experimentation with alternative social systems." With initial designs and specifications now delivered, the dream of floating political experiments takes an important step toward becoming reality.

DeltaSync's Seasteading Implementation Plan works from the premise that early efforts will be anchored in sheltered harbors—specifically, the Gulf of Fonseca, bordering El Salvador, Honduras, and Nicaragua—until more experience is acquired. The modular design is still intended to be mobile, however, and potentially suitable for deep-sea location if surrounded by a breakwater.

The first-draft design assumes the construction of concrete modules, 50 meters by 50 meters, each with a population of 225 people, which can be easily connected and disconnected. The modules could be moved by tugboat and linked in various configurations as needed. And those configurations could then be rearranged to suit the needs and preferences of community members.

In terms of sustainability, the plan envisions algae farming, aquaculture, and aquaponics for growing fresh vegetables, so that at least some food could be locally sourced. Rainwater would be collected for freshwater and as an alternative to energy-intensive desalination or importation.

Speaking of energy, a tropical, oceanic location lends itself to solar power collection, with battery storage and backup diesel generators.

And the "why" of all this? That is, what's the motivation to wave goodbye to friends, family, and the nice people in the local bureaucracy to set up shop on a man-made island, far from tax collectors, regulators and— Wait, That answers itself, doesn't it? Nevertheless, the plan considers the question.

While experimentation with rules and new forms of government is the highest priority for the seastead, economic influences cannot be ignored. This means the city should be attractive for a diverse array of manufacturing and service-based companies. Also sufficient incentives should be developed for companies and entrepreneurs to move to the seastead. Such incentives should include: clear and simple legislation, low taxes, lower office rents than in the city center, a diverse and well-educated work-force, access to knowledge, technology and innovation, good (public) transport connections to the wider metropolitan area, especially when the city is small at the beginning. Another important asset is the access to global markets by connections to an airport and seaport. The marketing to attract these businesses to the floating city should be very good. The first floating city in the world will also attract a large number of tourists, in order to create opportunities for recreational businesses like hotels and restaurants.

None of this is a done deal, yet. Barriers remain to creating independent or semi-independent new communities at sea. And while those barriers are real, they increasingly look political, and surmountable, as the engineering and economic hurdles to such projects are understood and overcome.

What's interesting about seasteading is that the mere ability to create new nations where innovators and dissenters might find refuge could put pressure on existing nations to at least moderate their excesses, even if the floating communities don't attract vast numbers of residents. The United States and Europe have been trying to reduce policy competition in recent years, specifically targeting "tax havens." Seasteading could blow that all open again, by creating new competitors.

Don't miss Brian Doherty's coverage of the early days of the seasteading movement.