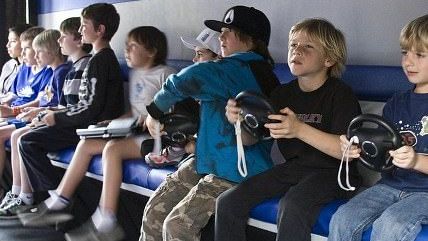 The latest research into the impact of video games on children's minds comes from studying the behavior of more than 11,000 children between the ages of 5 and 7 across the United Kingdom. That's a pretty big pool. Their conclusion: No correlation between playing video games and any sort of conduct problems whatsoever. The study also focused on television viewing and determined that kids who watch lots of television but don't play video games were more likely to have conduct problems than those who do play video games.

The study from the University of Glasgow is available here (pdf) and is a fairly easy read. As with any mass study like this, there are some gaps. Because of the voluntary scope of participation, the sampling isn't fully representative and depended on the accuracy of information reported by the children's mothers. They separated children by gender and by how much time they spent each day playing video games or watching television. They evaluated the "psychosocial adjustment" of participants in several categories to determine emotional or conduct problems after they reached 7 years. They really did not find that much, but they did note: "Children playing no games were more likely to show increased problems (except peer problems) compared with playing [less than one hour] daily." The only statistically significant association they discovered was among children who watched three or more hours of television a day. They showed more conduct problems, but even then the number was low. And they didn't notice any difference based on gender.

Still though, the total gaming exposure of these young kids is pretty low – less than four percent reported playing video games for more than three hours per weekday. The game panic these days is focused on teens who go on marathon Call of Duty binges for hours on end. I don't see this study taking the wind out of that argument, but it could come a as a relief to parents who feel judged by those media nannies suggesting that their little loved ones are being turned into monsters by their Nintendo Wii.