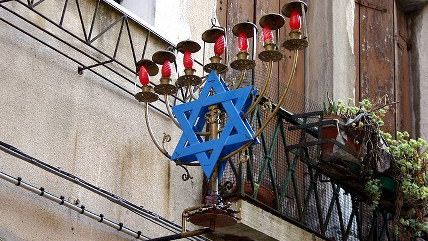 Is hostility toward Israel linked to hostility toward Jews? A report on anti-Semitism in Europe, released on November 8—the day before the anniversary of the Kristallnacht pogrom that marked the start of the Nazi war on Jews 75 years ago—addresses this contentious question. While Israel's supporters have long warned of a new strain of anti-Semitism camouflaged in pro-Palestinian advocacy and opposition to Israeli policies, Israel's critics complain that charges of anti-Jewish bigotry are used to silence dissent. Yet the latest study, Discrimination and Hate Crime Against Jews in EU Member States, strongly suggests that "the new anti-Semitism" is not a propagandist myth but a depressing reality.

The evidence is especially compelling since it comes from a neutral source: the European Union Agency for Fundamental Rights (FRA). The agency surveyed nearly 6,000 self-identified Jews in eight European Union countries (Belgium, France, Germany, Hungary, Italy, Latvia, Sweden and the United Kingdom). While the online survey, publicized through Jewish community organizations and media outlets, did not have a random sample of respondents, it was designed with expert input to be as representative as possible.

Even if the self-selected the pool of respondents was skewed toward those affected by or strongly concerned about anti-Semitism, these are still disturbing results.

The survey also reveals some interesting—and not entirely surprising—facts about the face of anti-Jewish bigotry in 21st Century Europe. Most of those who reported anti-Semitic harassment identified the culprit or culprits as having either "Muslim extremist views" (27 percent) or left-wing political views (22 percent); only 19 percent said it came from someone with right-wing beliefs.

This tendency is even stronger for anti-Semitic hate speech, from Holocaust denial to claims that the Jews "exploit Holocaust victimhood" or have too much power. (The exceptions are Latvia and Hungary, where anti-Semitism is more likely to be of the traditional far-right variety.) Among Western European Jews who reported encountering such slurs in the past year, 57 percent had seen or heard them from left-wingers; 54 percent, from Muslim extremists; 37 percent, from right-wingers; 18 percent, from Christian extremists. Moreover, the most common anti-Jewish comment reported in the survey was that Israelis act "like Nazis" toward the Palestinians—rhetoric European institutions have repeatedly condemned as anti-Semitic.

Of course criticism of Israeli policies does not equal anti-Semitism: All states are fallible, and the state of Israel is locked in an excruciatingly complex conflict with the Palestinians in which there is very real suffering on both sides. Yet the Israelis-as-Nazis metaphor is a stark illustration of how far such criticism has gone beyond the pale. Such analogies do not get thrown at states with far worse human rights records, such as China or Russia; even South Africa's racist apartheid regime, however reviled, was not routinely attacked as Nazi-like. The Israelis are singled out for this comparison precisely as Jews—the primary targets of Nazi genocide—who have supposedly traded places with their murderers. If this is not anti-Semitism, what is?

Yet such parallels are creeping into mainstream left-wing discourse, even in the United States. The new book, Goliath: Life and Loathing in Greater Israel by Max Blumenthal, heavily promoted by The Nation—the leading magazine of the American left—features such chapter titles as "The Concentration Camp" and "The Night of Broken Glass." (Even Nation columnist Eric Alterman, himself a vocal critic of Israel, has slammed Goliath for, among other things, the "implicit equation of Israel with Nazis.")

There are even more striking examples of the fusion between Israel-bashing and Jew-bashing. A 2011 tract called The Wandering Who? by Israeli-born British musician and self-styled "self-hating Jew" Gilad Atzmon not only asserts that Israel is "far worse than Nazi Germany" but suggests that historical anti-Semitism in Europe must have been the Jews' fault. Atzmon brags about getting suspended from school as a child for asking the teacher how she knew that Jews didn't really murder Christian babies for ritual use of their blood. He also blames American Jews in the 1930s for provoking Hitler by calling for a boycott of German goods.

While some anti-Zionist leftists and pro-Palestinian activists denounced Atzmon's book, it received a disturbing amount of praise—including a blurb from University of Chicago professor John Mearsheimer, co-author of the controversial book The Israel Lobby and U.S. Foreign Policy. A major British newspaper, The Guardian, carried The Wandering Who? in its online bookshop before pulling it in response to criticism.

In this toxic climate, the lines between "new" and "old" anti-Semitism keep getting more and more blurred. Last year, veteran Norwegian academic Johan Galtung, the founder of "peace studies" and a distinguished professor at the University of Hawaii, came under fire for some eyebrow-raising statements. Among other things, Galtung had described the Protocols of the Elders of Zion, a 1903 hoax "documenting" a Jewish world domination plot, as a useful tool for understanding the modern world; he had also made outlandish claims about Jewish control of the American media, apparently drawn from neo-Nazi guru William Luther Pierce.

Sympathy for the Palestinians, who are seen as Third World victims of pro-Western colonialists, has led many on the left to condone anti-Jewish attitudes presumably driven by anger at Israeli oppression. Take Alterman, the anti-Goliath polemicist, who in a recent blogpost writes that he himself has often been attacked and tarred with the anti-Semitism brush by Israel sympathizers. I am one of those polemicists, and I regretfully admit that in a 2005 column I made some inappropriate comments about Jewish self-hatred. Yet there remains the fact that Alterman has written off anti-Jewish violence by young Arab immigrants in France as a backlash against the Israeli occupation of the West Bank (rather than real anti-Semitism) and defended a British Muslim group's decision to boycott a Holocaust remembrance event. Whatever the motive, such excuses effectively amount to enabling anti-Semitism. And as long as such enabling continues, the problem will keep getting worse.