Was the Decision to Award the Nobel Peace Prize to Chemical Weapons Inspectors an Admission That Awarding Barack Obama Was a Mistake? 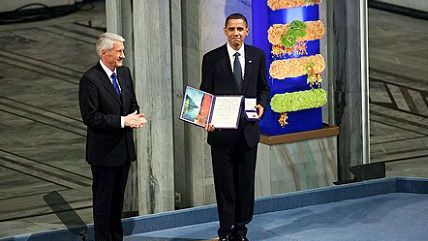 The Nobel Committee announced today that it had decided to award this year's Nobel Peace Prize to the Organization for the Prohibition of Chemical Weapons (OPCW), an intergovernmental organization established via the (1993) Chemical Weapons Convention, an international treaty that bans chemical weapons, when it came into force in 1997, the year the United States and several other countries ratified it, bringing the total ratifications to the 65 required for the treaty to go into effect.

The OPCW received the award for its "extensive efforts to eliminate chemical weapons," according to the Nobel Committee's press release, which mentions Syria only once (that the recent usage of chemical weapons there "have underlined the need to enhance the efforts to do away with such weapons"). Notably, however, the Nobel Committee does not mention any specific instance of the OPCW eliminating a chemical weapons stockpile in any country, as it is currently in the process of doing in Syria. While the process for making the Peace Prize selection begins the September of the previous year, with nominations due by February, it is hard to imagine the OPCW winning outside its role of preventing a military intervention in Syria.

When Secretary of State John Kerry suggested Syria surrender its chemical weapons to avoid a Western attack, he meant it only rhetorically. Yet Syria's ally Russia jumped at the opportunity, helping to arrange the current involvement by the OPCW. In contrast, as President Obama was pushing the notion of "red lines" and military interventions, he appealed to the idea of "international norms" the US both exempts itself from and would attempt to enforce unilaterally.   What President Obama did not do is appeal to the OPCW or offer to aid them in their work to "eliminate chemical weapons."