Time's Michael Grunwald, Who Wants the Government To "Tread on Me," Also Wants Julian Assange Droned 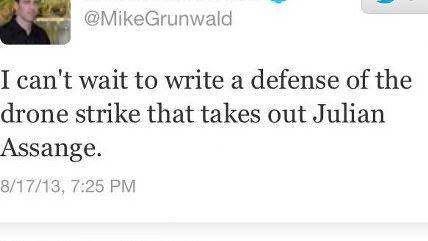 If there were any doubts that Time magazine's Michael Grunwald is a huge fan of a big, activist and somewhat psychopathic government after he penned his ode to the state, "Tread on Me," such skepticism should be dispelled by his tweeted call for a lethal drone strike on Julian Assange of Wikileaks. To be completely accurate, he tweeted, "I can't wait to write a defense of the drone strike that takes out Julian Assange."

A TIME magazine reporter caused ire on Twitter Saturday night when he said that he "can't wait to write a defense of the drone strike that takes out" Wikileaks founder Julian Assange.

Michael Grunwald's tweet, since deleted, was quickly met with outrage and bewilderment. Glenn Greenwald, who recently broke several revelations about NSA surveillance programs based on documents provided to him by leaker Edward Snowden, was particularly vocal in expressing his disgust with Grunwald's statement.

Although removed from Twitter, the tweet lives on as as screen captures by astonished web surfers everywhere.

Amidst a flurry of, not surprisingly, harsh criticism, Grunwald not only deleted his cheerleading for death from the sky, but apologized: "It was a dumb tweet. I'm sorry. I deserve the backlash. (Maybe not the anti-Semitic stuff but otherwise I asked for it.)"

Grunwald's apology should be taken with a grain of salt, since his devotion to a good stomping by the state is nothing new. Back in April, he penned "Tread on Me: The Case for Freedom From Terrorist Bombings, School Shootings and Exploding Factories":

I guess you could call me a statist. I'm not sure we need public financing for our symphonies or our farmers or our mortgages—history will also recall my Stand With Rand on the great laser-pointing controversy of 2011—but we do need Big Government to attack the big collective action problems of the modern world. Our rights are not inviolate. Just as the First Amendment doesn't let us shout "Fire!" in a crowded theater, the Second Amendment shouldn't let us have assault weapons designed for mass slaughter. And if the authorities decided it was vital to ask Tsarnaev about his alleged murder of innocents before reminding him of his Fifth Amendment rights to lawyer up, I won't second-guess their call. The civil liberties purists of the ACLU are just as extreme as the gun purists of the NRA, or the anti-regulatory purists in business groups like the Club for Growth.

In that piece, with regard to drones, Grunwald wrote, "I'm more inclined to stand with the public servants keeping us safe, even when the al-Qaeda operative they ice in Yemen is an American citizen."

As I wrote at the time, "Grunwald knows what he wants, and he wants it good and hard." It's no surprise that he prefers people with whom he disagrees to get it even harder — and occasionally in the form of remote-controlled death from the sky, without even a pretense of due process.

Update: A Time spokesperson says, "Michael Grunwald posted an offensive tweet from his personal Twitter account that is in no way representative of TIME's views. He regrets having tweeted it, and he removed it from his feed."