Not so easy to define 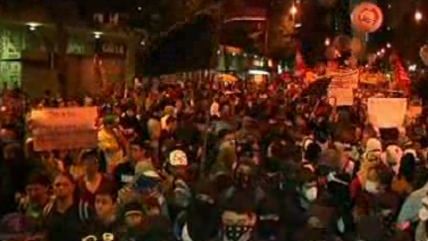 Demonstrations that began in June as protests against a bus fare increase in Sao Paolo continue throughout Brazil, and the effort in Brazil and outside of it to define their make-up and goals also continues.

An article in the Boston Review by Ana Claudia Texeira and Gianpaolo Baiocchi looks at some of the tensions between demonstrators and the Brazilian institutions and organizations trying to define or even co-opt them, including political parties like the ruling Worker's Party, but also so-called "traditional movements" (like labor unions and other largely left-wing groups):

Traditional movements have a distant and cautious relationship with the recent protests. Some organized movement leaders, from the protests' early days, have expressed suspicion at both the middle-class component and the distrust of political parties that pervades the June Movement, a supposed "fascist tendency." Some traditional organizers claim they see evidence of right-wing manipulation in the protests and that the demonstrators are privileged people who do not understand the importance of a leftist government.

But other organizers have attempted to more centrally and visibly insert their movements into the broader wave of protests. Several of the large unions, in concert with some nationally organized movements, called for a "National Day of Struggle" on July 11, which included a general strike. The demands—for political reform and greater spending on health and education—were consonant with the concerns of the protesters.

Still, the strike, more than anything, showed the distance between traditional movements and recent protesters. Services stopped in some cities, but street protests were muted.

The whole thing's worth a read and provides a good understanding of the complexity of the forces at play in Brazil's protests. For a pessimistic view from a Brazilian economist on the protesters' chances at political success, read this. Jesse Walker explained last month how decentralized protests in Brazil and elsewhere around the world are befuddling traditional centralized power structures.