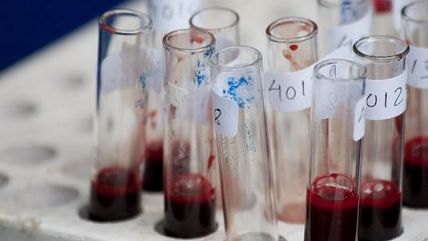 On Friday, the first National Gay Blood Drive was held, with HIV testing sites being set up near blood donation centers in 50 cities across the country. Gay men tried to give blood after testing negative for HIV, and organizers plan to send the rejection forms the gay men receive, along with their HIV test results, to the FDA, in order to urge it to change its policy of not allowing gay men to donate blood.

Since the 1980s, the FDA has banned blood donations from sexually active gay men any man who has had sex with another man at any point after 1977. When the ban was instituted, little was known about HIV or how to test for it, and thousands of people became infected through blood transfusions. Today, all donated blood gets tested for HIV. But the ban continues, with the FDA explaining that "tests cannot detect HIV 100% of the time" and that "MSM" (the FDA's abbreviation for "men who have sex with other men") remain the highest-risk group for HIV infections, with infection rates continuing to increase even as infection rates for intravenous drug users and heterosexuals has gone down.

Nevertheless, the FDA admitted in 2010 that its "donor deferral policies" were "suboptimal in permitting some potentially high risk donations while preventing some potentially low risk donations," but voted to keep the policies and study the issue further. The FDA says the Department of Health and Human Services is studying several questions related to changing the deferral policy, including: "What motivates men with MSM behavioral history to donate blood and would MSM be likely to comply with modified deferral criteria?", which suggests at least some gay donors have adopted at least half of a "don't ask, don't tell" policy on their "MSM behavioral history."

The demonstration follows a vote last month by the American Medical Association recommending the ban on gay men donating blood be lifted and an emergency plea by the American Red Cross last week for more blood donations as a seasonal slump continues.