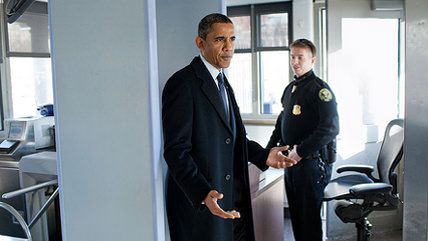 In February the U.S. Supreme Court rejected a challenge to warrantless surveillance conducted under a 2008 amendment to the Foreign Intelligence Surveillance Act that allows the government to intercept Americans' communications with people outside the country. The plaintiffs in Clapper v. Amnesty International failed to demonstrate standing to challenge the law, said the Court, since they couldn't show evidence that anyone had eavesdropped on them. That's difficult given that the government won't reveal whose communications it intercepts, which means that nobody can claim standing in the absence of a leak.

Writing for the majority, Justice Samuel Alito said, "It is highly speculative whether the Government will imminently target communications to which respondents are parties," since "they have no actual knowledge of the Government's §1881a targeting practices." That is exactly the argument the federal government has pushed since this case began. The American Civil Liberties Union (ACLU) warned in 2012 that "the Justice Department claims the plaintiffs should not be able to sue without first showing they have actually been monitored under the program—but it also argues that the government should not be required to disclose if plaintiffs have been monitored."

We know that the federal government has engaged in such spying only because of official incompetence. The Al-Haramain Islamic Foundation sued when the government accidentally delivered call logs to three of the group's affiliates, revealing that it had intercepted their communications. While the group won its case and was awarded damages, those damages were subsequently thrown out on the grounds that the federal government is immune to such lawsuits. The Supreme Court's ruling in Clapper means we may never find out whether the government could have claimed sovereign immunity in this case too, putting its surveillance beyond challenge.