North Korea May Be Calming Down as World, or at Least America, Stops Paying Attention 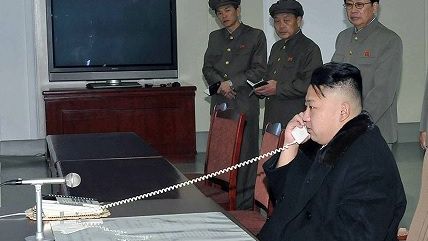 North Korea says it won't talk until sanctions against its nuclear program are lifted and the U.S. and South Korea stop conducting military drills in the region, which according to some analysts could be a sign that the regime is ratcheting down its rhetoric (they've spent months threatening to attack South Korea and the United States) and may be ready to talk. On Monday, the regime celebrated the 101st anniversary of the birth of North Korea's founder in a lower key affair than previous years (last year they launched a missile). It was preceded with a visit to the region over the weekend by John Kerry. In Beijing he urged the Chinese government to put more pressure on North Korea. It responded by blaming increased regional tensions on President Obama's vaunted second term "Asia pivot." The arms industry expects significant growth in the exports of arms to the region this year and the U.S. has begun to boost its naval presence in places like Australia. Matthew Feeney noted in December how America's propensity for interventionism could drag into a dispute over uninhabited islands in the East China Sea.

Meanwhile, the Global Post reports about fringe bloggers in South Korea suggesting the Boston Marathon bombing be used as a pre-text to take out Kim Jong Il, latching on to a conspiracy theory that has North Korea as the potential mastermind of the attack; the FBI hasn't identified any suspects yet.