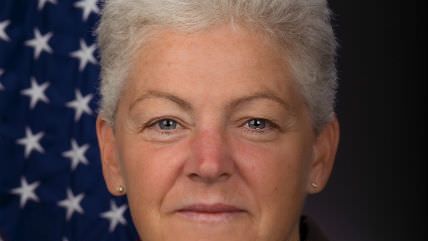 â€œPresident Obama on Monday named two people to his cabinet who will be charged with making good on his threat to use the powers of the executive branch to tackle climate change and energy policy if Congress does not act quickly. Yesterday, President Barack Obama nominated Gina McCarthy to head up the Environmental Protection Agency,â€ reports the New York Times today. Nice word â€" â€œthreat.â€ After all, McCarthy would be in charge of the bureaucracy that hopes to determine the kind and price of energy that Americans will use for decades to come.

League of Conservation Voters head Gene Karpinski: â€œGina McCarthy cares about progress not partisanshipâ€¦. We look forward to working with her to combat the climate crisis, protect our air and water, and advance chemical policy reform.â€

Alliance to Save Energy President Kateri Callahan: â€œFrom her state-level energy work to her important role in the historic, new federal fuel economy standards, Gina McCarthy has been, and will continue to be, a major player in advancing energy efficiency.â€

Biofuels lobbying group Growth Energyâ€™s CEO Tom Buis: â€œSheâ€™s willing to listen to all of the different stakeholders in the debate and as we move forward in a number of challenges to increase biofuels throughout this country we look forward to working with Gina again.â€

Institute for Energy Research President Thomas Pyle: "Today's announcement that the president wants Gina McCarthy to serve as the next EPA administrator is a clear indication that the administration will continue a war on affordable energyâ€¦. McCarthy will continue the regulatory attack on oil, coal, and natural gas with the result that Americans will experience increasing energy costs and high unemployment rates."

Heartland Institute Senior Environmental Policy Fellow James Taylor: â€œGina McCarthy has a long history of demonizing affordable energy and doing everything possible to shut it down. She also has a long history of making up fictitious facts to support her anti-energy ideology. McCarthyâ€™s number-one priority at EPA will be enacting unprecedented restrictions on energy production and use that will further drive up energy prices. If Americans like dramatically rising gasoline prices and rapidly rising electricity prices, they are going to love Gina McCarthy.â€

Instead of immediately antagonizing the bureaucrat who is likely to oversee the regulations that determine their futures with denunciations, fossil fuel industry public statements basically express wan hopes that the new administrator will be kinder to them than the last one was.

American Petroleum Institute CEO Jack Gerard: â€œWe congratulate Gina McCarthy on her nomination to head the EPA. President Obama says his top priority is creating American jobs, and we will continue working with the EPA and the administration to help avoid jeopardizing that goal. The problem is that EPA, in many cases, is not proposing regulations that meet this goal.â€

American Coalition for Clean Coal Electricity President and CEO Mike Duncan: â€œWe hope for a more constructive working relationship with the EPA under [Gina McCarthyâ€™s] leadership. We hope that if she is confirmed she can put EPA on a more balanced path that recognizes Americaâ€™s continued need for coal, and the importance of clean coal technology.â€

The Senate hearings on McCarthyâ€™s nomination should be fun to watch, but the Democrats likely have the votes to confirm her as administrator.