What Would Cronkite Do?

Scott Shackford | From the October 2012 issue 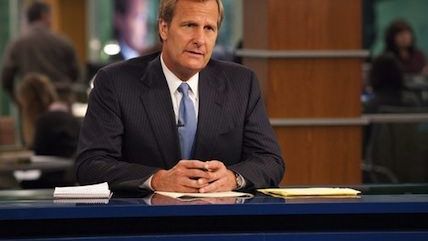 Aaron Sorkin's new HBO drama, The Newsroom, argues that television news was better in the days of Edward R. Murrow and Walter Cronkite, when the men of the traditional media considered it their duty to use the "public airwaves" to provide an hour of news each evening that would define what the public understood about every issue.

Sorkin overestimates the power of anchors in the 1950s and '60s while overlooking the fact that cable channels produce 24 hours of news a day without using the public airwaves. His cast, led by Jeff Daniels as a bland but secretly angry cable anchor seeking relevance, spits out condescending and familiar political lectures while trying to develop a prime time show that arrogantly presumes to reveal "the truth."

Straw men are giddily set to flame. Cloying background music notwithstanding, the show manages all the gravitas of a gaggle of poli-sci undergrads arguing in a dorm hallway. —Scott Shackford