The Past of the Future of Space

Katherine Mangu-Ward | From the August/September 2012 issue 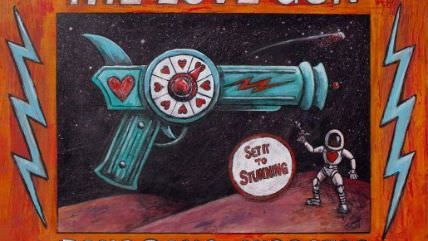 â€œElevator to the Moon: Retro-Future Visions of Spaceâ€ is a petite, uneven show hiding in a back hallway at the massive, quirky bar-and-art venue Artisphere in Arlington, Virginia. The exhibit offers 15 artists the chance to â€œcreate work that celebrates beautifully flawed ideasâ€ from the 20th century about what the 21st would be like.

The quality of the work varies tremendously. Dana Ellynâ€™s acrylic-on-canvas depiction of jetpack-equipped astronauts zooming toward a glowing Space Jesus in Rapture Rocketeers, for example, is a crime against kitsch.

But intrepid artonauts will be rewarded by Steve Strawnâ€™s three Space Invadersâ€"inspired photo prints, where familiar bitmap Atari aliens become sinister shadows glimpsed through a haze of battle smoke and rain. Other highlights include a travel poster in which a friendly robot cruise ship captain bids â€œAlohaâ€ from Mare Tranquillitatis, the moonâ€™s waterless Sea of Tranquility. â€"Katherine Mangu-Ward