The Past of the Future of the Deficit

When Ridley Scott took on the national debt.

Katherine Mangu-Ward | From the November 2011 issue 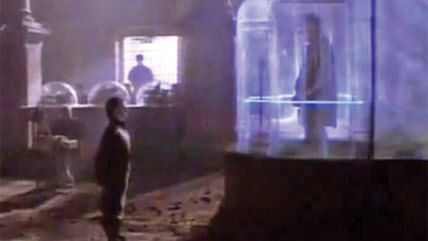 In 1986 Blade Runner director Ridley Scott put together a lavish ad called The Deficit Trials: 2017. Set in a post-apocalyptic future, the spot shows angry, shivering urchins crowded into a ruined courtroom. The adults in the scene stand accused of failing to control the deficit before it was too late. "By 1986 the national debt had reached $2 trillion," the kid playing the prosecutor says to the grizzled old man in on the stand. "Didn't that frighten you?"

In a contemporaneous news piece, Dan Rather called it a political commercial on "the sticker shock and future shock of deficit spending." But the spot turned out to be too hot for TV. Broadcasters refused to air it. "The networks," Rather explained, "don't want to open the door to just any advertiser who can afford the money to push his own ideas."

In August, while the ink was still damp on an unsatisfying and insufficient deficit deal, Ridley Scott signed on to direct a new installment in the Blade Runner franchise. Twenty-five years and another $12 trillion of debt later, it might be time to update the ad as well.