Artifact: Cancer, Schmancer—As Long As I'm Not a Drug Addict

Jacob Sullum | From the November 2006 issue 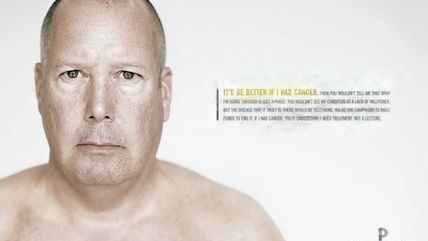 A new ad campaign from the Partnership for a Drug-Free America announces that "drug addiction is a disease." In fact, say the ads, addiction is worse than a disease, because people are not inclined to sympathize with addicts, viewing excessive drug use as voluntary behavior rather than a condition requiring medical attention. The "Hope, Help, and Healing" campaign tries to correct that perception: In a TV spot and a series of print ads like this one, shirtless addicts of various ages, sexes, and colors declare they'd be "better off" with a brain tumor, cancer, AIDS, or heart disease.