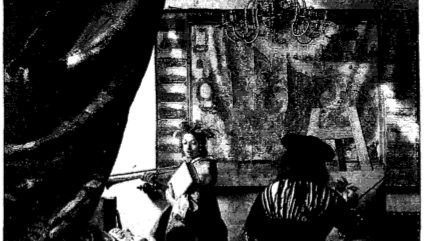 In November, Washington's National Gallery welcomed Johannes Vermeer's famous 1667 canvas, The Art of Painting, as a piece of Fine Arts royalty. Scheduled as the centerpiece of the gallery's hugely popular 1995-96 Vermeer retrospective, the work was then deemed too fragile to travel. The gallery has now honored the restored canvas by making it a one-painting show.

Not bad, given that Vermeer was promptly forgotten for almost 200 years after his death in 1675. Dutch painting in general was long regarded by critics as "vulgar"–it portrayed too many middle-class, bulbous-nosed burghers. Vermeer's current reputation stems not only from the eventual embrace of Dutch work but from technology: It was the spread of photography that revealed Vermeer's remarkable treatment of light to ever more admirers.

The camera revolutionized the representation of motion, light, and focus. But it not only changed the way painters portrayed their subjects; it also affected the way viewers saw paintings. Vermeer's 17th-century, proto-photographic approach to light and focus was influenced by technology as well. He was close to Anton van Leeuwenhook, perfector of the microscope, and apparently shared his friend's interest in optics. Vermeer's art, in short, is a marriage of innovations, and of talent and machine.