Joe Cobb | From the September 1976 issue


TURN ON, TUNE IN, DROP OUT

From the beginning of the Republic, pundits and politicians have told us of our "duty to vote" and to take an active role in politics. Children are taught in the public schools that "the majority rules," and adults continue to believe that a majority of their fellow citizens voted for the culprits who tax them, police them, and bore them to tears. 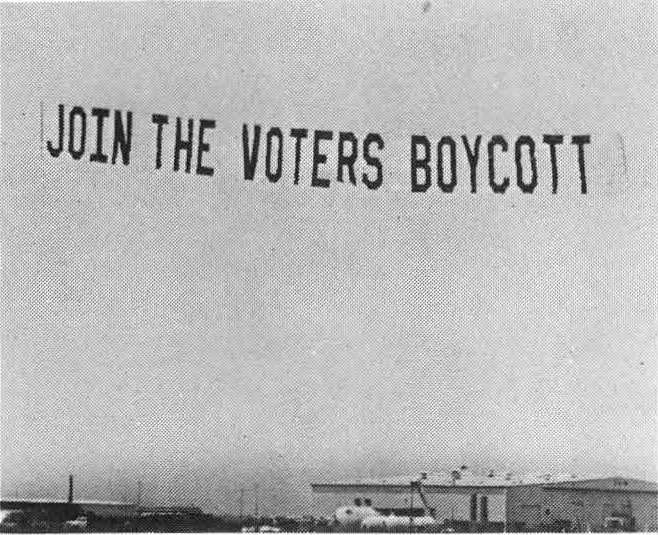 Prior to the California primary elections last spring, the League of Non-Voters rented an airplane on the Memorial Day weekend and the weekend immediately prior to the election. The plane flew over the coast of California from Long Beach to Anaheim, and was visible to several million people. The banner is legible in this photo, although the plane is out of the picture.

In the press release which announced the publicity stunt, the League of Non-Voters pointed out that Governor Jerry Brown was elected by fewer than 20 percent of the citizens of California in 1974, with 65 percent refusing to waste time at the polling booth. If the press thought about that, they might wonder at the true significance of the Democratic and Republican conventions—and the question might be opened: who are these delegates, whom do they really represent, and what sort of fraud has been put over on the American people?

The League of Non-Voters, of course, supports the plan to add "None of the Above is Acceptable" to the ballot. The press release continues with the threat that until the election laws are changed to include "None of the Above," the voters will continue to boycott the polls. Every politician and tax-receiver in California, to be sure, had a sleepless night.

Earlier this year, the Libertarian Party's petition drive in California to put "None of the Above is Acceptable" on the ballot failed with only a miserable thousand or so signatures collected by the deadline—and a popular idea, which the media enjoyed and the State of Nevada adopted by legislation, fizzled. The MacBride for President campaign has encountered similar problems—but has managed to achieve a remarkable showing. Now, the LP has targeted California for its last major petitioning effort of the campaign, to place MacBride and Bergland on the ballot as independents. Contact MacBride for President, 1299 Bayshore Highway, Burlingame, CA 94010 (415) 347-1095.

At a time when new housing starts are flagging, home builders across the country are organizing to abolish zoning and building ordinances that they believe push up construction costs by 10 percent.

The National Association of Home Builders has recently formed a panel to coordinate the deregulation movement. Led by a North Carolina builder, John Crosland, it is directing attention to controls that are "putting people out of the market" by forcing them to pay for such items as smoke detectors and outdoor electrical outlets—whether the consumer wants them or not.

Builders are particularly upset by obstacles to building "no frills" houses. Not only do conflicting local codes prevent standardized construction, but Federal and other restrictions dictate street widths and even such matters as window-sill heights. As a result, builders observe, low-cost housing is beyond the reach of many families.

Most officials deflect the criticisms with claims that the builders are padding costs and not being "innovative" in the face of rising land prices. The chief of the Florida Bureau of Codes and Standards, however, admits that the regulations do drive up the costs of new housing. As first targets for reform, the official, Jack Haslin, suggests those codes that specify mandatory material and sizes for wiring, pipes, and other equipment.

SAVE THE CITIES—AND MAKE A PROFIT

According to the recently-formed Association for Rational Environment Alternatives, 1169 Summit Rd., Santa Barbara, California 93108, cities have virtually ignored an alternative to government renewal programs in decaying areas. Aging buildings, AREA points out, provide ideal, low-cost spawning grounds for new enterprises. The association intends to explore this theme in a conference to be held this fall in Houston, the only major American city with no zoning laws.

Members of the audience will hear evidence that zoning laws, building codes, and punitive taxes hamper the natural renewal of cities by private developers. To illustrate the point, tours will be organized to show firsthand the renovation that has been achieved in Houston that would be frustrated in other cities. Developers will explain how they have used the city's relative freedom to renovate and refurbish structures—and to make a profit.

Information about the conference is free for the asking. AREA also invites libertarians to join the association: memberships are $24 a year for those who deal with land use, urban, and environmental issues as a career, and $12 a year for associate members. Members receive a lively bimonthly newsletter featuring news about land use trends, and about the activities of AREA officials and board members, who include Eugene Guccione, John McClaughry, Petr Beckmann, and other well-known libertarians.