Why Americans Fear the COVID-19 Vaccine

Government failure eroded public trust. Fact-based persuasion and brutal honesty about scientific uncertainty are the only way to win it back. 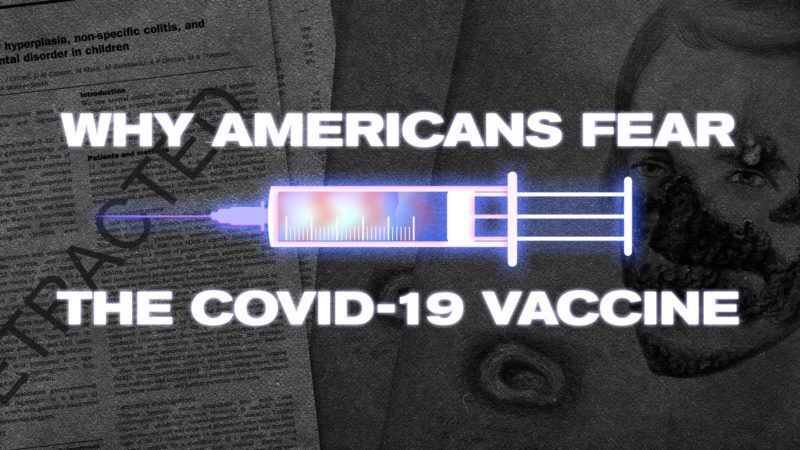 Six months into America's COVID-19 pandemic, cases are surging, small businesses are faltering, playgrounds are empty, and unemployment is at 11 percent. Our best hope for ending this nightmare is a vaccine, and there are more than 165 in development.

But when a vaccine becomes available, how many Americans will refuse it?

Vaccines are the greatest health care advance of our time, preventing an estimated 4.5 billion infections since their advent. So what explains the reluctance of so many Americans to vaccinate?

It's a combination of bad science, the government's long history of misleading the public, and the collapse of confidence in public health authorities because of their catastrophic failures in response to the COVID-19 pandemic.

But if the government responds by attempting to force Americans to take a COVID-19 vaccine, it will only help the conspiracy theorists. Public health officials can begin to undo the damage of the past six months by rejecting authoritarian and paternalistic approaches in favor of careful persuasion and brutal honesty about the limits of their own knowledge.

Though most Americans surveyed say they'll probably take the vaccine, there's a real possibility that a sizable bloc of refusers could allow this novel coronavirus to continue spreading, based on what's happened with measles, cases of which surged to record levels in America in 2019 largely due to pockets of vaccine refusal, which tends to happen in clusters, according to researcher Tara C. Smith.

"When you have some of these groups of individuals where vaccination rates are low, it just takes one person with measles to get in there and spread it through a community," Smith says.

Vaccine skeptics often focus on the claim that childhood vaccines cause autism, an idea endorsed by Donald Trump during a 2015 presidential debate.

This claim famously was amplified by a British researcher named Andrew Wakefield, whose 1998 paper linking vaccines and autism was later retracted. The U.K. General Medical Council found Wakefield guilty of multiple ethics violations for lying about his test subjects and failing to disclose a financial link to an anti-vaccine lawsuit.

But concern about vaccines is rising among parents, along with objections to the use of mercury preservatives, which haven't been proven to do harm and haven't been present in childhood vaccines for nearly 20 years.

An ecosystem of anti-vaccine information has emerged and, according to the American Journal of Public Health, bots and paid Russian trolls participate in online vaccine debates far more than the average social media user. The trolls don't always join the anti-vaccine side of the debate but aim to elevate the visibility to "create false equivalency, eroding public consensus on vaccination," according to the researchers.

"You have some people that really don't know what to think," Smith says. "And they're really just trying to figure out, you know, what is going on? What do I believe? What do I trust? Maybe haven't cemented their ideas about vaccination yet…Those people in the middle are the ones that I try to reach."

But U.S. public health authorities have sometimes misled the public about vaccines and other public health interventions, which has made the job of convincing skeptics more difficult.

In 1932, government doctors recruited mostly poor black sharecroppers at the Tuskegee Institute for a study of the impact of syphilis.  The participants, the majority of whom had the disease, were told that they were getting an experimental medicine when in fact they were all given a placebo. Scientists running the study were actually interested in the progression of the illness when left untreated.

The experiment continued until well after penicillin became available in 1947, and many participants died.

Another incident that damaged trust in public health occurred in 1976, when a novel virus called the swine flu broke out at a U.S. Army base. Scientists believed that it bore a genetic similarity to the 1918 flu that had killed more than 100 million people worldwide. President Gerald Ford authorized $135 million to develop and deploy a vaccine, and the government injected 25 percent of Americans in a 10-month period. But the global pandemic never came. The disease died out. And the rushed version of the vaccine likely resulted in some injuries, though probably not as many as reported by the media at the time.

"It's hard, but I think we have to emphasize that uncertainty. And I think that may have been one thing missing with the [protective face] masks, and I was probably guilty of it myself, too," says Smith.

One reason public health officials may face considerable resistance to a nationwide vaccination program is because of their handling of COVID-19.

After reversing their position on face masks, authorities claimed their earlier message was motivated by a desire to preserve protective gear for medical workers without ever acknowledging that they were wrong to say that masks wouldn't slow the spread of the virus.

The World Health Organization (WHO) failed to properly investigate the original outbreak in China, perhaps leaving the world less prepared than it should've been for the emerging pandemic; the Trump administration repeatedly played down the threat of the virus, and the CDC botched the early rollout of testing.

If there is any hope of winning back public trust in a vaccination program, which, unlike the 1973 swine flu vaccine, will have been subject to extensive safety testing, public health authorities should acknowledge their past mistakes.

"Right now, in the United States, people should not be walking around with masks," the National Institute of Allergy and Infectious Diseases Director Anthony Fauci told 60 Minutes on March 8, 2020. "Wearing a mask might make people feel a little bit better, but it's not providing the perfect protection people think that it is. And often, there are unintended consequences: People keep fiddling with the mask, and they keep touching their face[s]."

The CDC changed its mask guidance on April 3, 2020, to recommend wearing surgical or cloth masks in public settings, and businesses and local governments began mandating masks. When asked before Congress on June 30, 2020, whether he regretted his earlier statements about masks, Fauci failed to acknowledge that he and other public health officials had called masks ineffective and instead focused exclusively on the supply shortage health workers faced at the time.

"I don't regret [not advising mask use] because, let me explain to you what happened: At that time [when public health officials didn't advise wearing masks], there was a paucity of equipment that our health care providers needed," Fauci said.

If warning against face masks was a so-called "noble lie" to preserve supplies for health care workers, public health officials should own up to that rationale, admit that their understanding of the transmissibility of virus was lacking, and stop condescending to the public.

And if a vaccine becomes available, doctors should acknowledge that vaccines can carry some risk, especially a new vaccine brought to market with record speed, but that it's a risk often worth taking because there are no perfect solutions, only trade-offs.

The lesson of the last six months is that authoritarian mandates and noble lies tend to backfire.

Fact-based persuasion, which is the basis of good science, is our best hope for stopping COVID-19 and restoring the personal freedom that's been eroded by the governmental and societal response to it.


Zach Weissmueller is a senior producer at Reason.