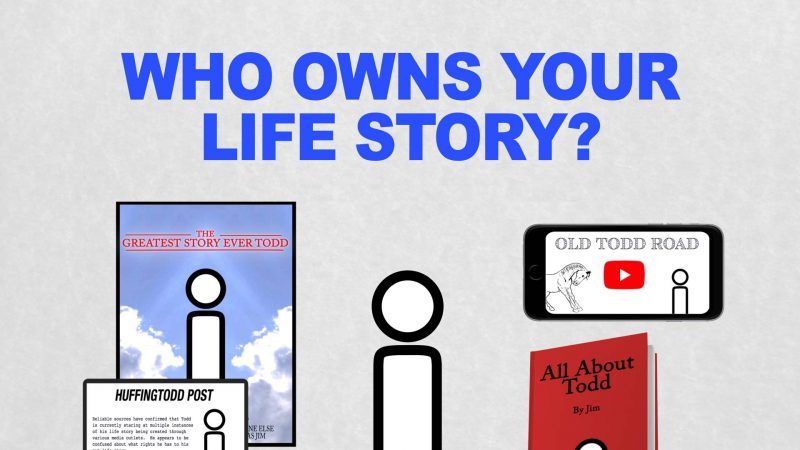 Do people need your permission to write about you? What if they want to make a movie about you, or a YouTube video, or a blog post, or whatever? Who owns your name, likeness, voice, and life story? Here's the answer, in four rules.

Well, two rules, one who-knows, and one piece of advice.

Rule 1: People can write books about you, make movies about you, or write articles about you without violating your so-called "right of publicity." That right is often defined as an exclusive right to commercial use of your name, likeness, voice, and other "attributes of identity"; but it does not apply to biography, fiction, news coverage, and so on.

The First Amendment protects people's ability to write about others. That's what newspapers do, both about famous people and about ordinary ones who happen to draw the newspaper's attention. It's also why we see unauthorized biographies, whether in print or on the screen, and fiction with real characters, like Midnight in Paris and Forrest Gump. And that's true even though those items are distributed for money.

So you don't really own your name or likeness or life story, in the sense of having exclusive rights over it. Neither does your biographer. No one owns it, because everyone is free to use it, at least when they're commenting about you and your life.

Rule 2: People generally can't use your name, likeness, or voice in commercial advertising. In some situations, such use can also violate trademark law, because consumers might be confused into thinking you're endorsing the product.

Exception: If people are advertising books about you or newspapers that mention you, it's OK for them to use your name or picture in doing so. Such ads are treated like the underlying book or newspaper, and are therefore allowed.

This right to prevent the use of a name or likeness in advertising applies not just to living people, but also to recently dead ones. How recent? Depends on the state where the people were living when they died. Some states cover people for 50 years after their death, some more, some less.

Rule 3: When it comes to merchandising, different state and federal courts have reached different results about this, often inconsistent results. The Missouri Supreme Court has held that people can sue over use of their name in comic books, though courts have consistently rejected this theory for other kinds of books. But this may be an outlier decision; other judges have criticized it, and the California Supreme Court has rejected such a lawsuit in a comic book case very similar to the Missouri one.

It's also unsettled whether athletes' names and statistics can be used in the big business of sports gaming, whether fantasy sports leagues or sports video games. The Supreme Court could resolve whether and when the First Amendment protects such less traditional communications media against right of publicity claims, but the Justices haven't done that yet.

Finally, a practical note: Even though creators may have the right to freely use people's names in, say, movies about them, it might still be a good idea to get their agreement, if possible.

There are several reasons for that. For one, while filmmakers and authors routinely win right of publicity lawsuits filed against them, there's still some risk and a lot of expense. Safer for the creators to pay some money, if they have it and the person is willing to take it.

Second, biographers can be liable for defamation if they get some significant facts wrong about a living person.

Third, working with subjects (or their heirs) can give authors access to facts they otherwise wouldn't know.

Fourth, getting the subject's permission can prevent bad publicity, and can enlist the subject into helping promote the work.

All this might be impossible. If a biography would be critical of its subject, for instance, the subject might refuse to cooperate. In that case, the authors may want to stand on their First Amendment rights—see Rule 1. But if cooperation is possible, it's a good idea.

Finally, all we say here has to do with American law. These days, much of the revenue for movies comes from other countries—and the rules in those countries might be different. Better safe than sorry, many producers and publishers say.

The First Amendment protects authors' rights to use others' names, likenesses, and life stories in biographies, works of fiction, and the like, even though such works are commercially sold. The so-called "right of publicity" can't stop that.

The First Amendment doesn't protect such uses in most advertising; there, the advertiser generally has to get the permission of people referred to in the ads.

Courts are split on whether people's names can be used on T-shirts, greeting cards, in video games, and the like.

And it's often a good idea to get the subject's agreement anyway, even for a movie that you might technically be legally free to make.

This is the fourth episode of Free Speech Rules, a video series on free speech and the law. Volokh is the co-founder of The Volokh Conspiracy, a blog hosted at Reason.com.