What We Saw at the Rally Against the Iran Nuclear Deal 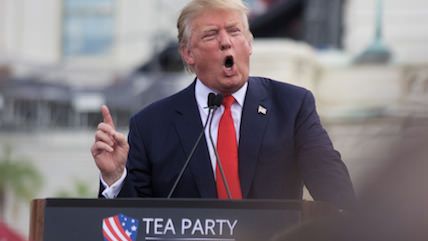 Today's big event in Washington, D.C. was a rally sponsored by the Tea Party Patriots against the Iran nuclear deal.
The event drew several hundred people who showed equal amounts of contempt for the Islamic Republic of Iran, President Barack Obama—and the congressional leadership of the Republican Party.

There doesn't seem to be a clear libertarian position on the Iran deal—some think it will open Iran up to moderating Western influence while others think it doesn't do enough to keep the mullah's nuclear ambitions at bay.

Reason TV caught up with Glenn Beck of The Blaze, radio host and best-seller Mark Levin, and former Congresswoman Michele Bachmann, all of whom ragged on establishment Republicans as much or more than they did on Harry Reid, Barack Obama, and Islamic clerics

And we managed also to find out what Donald Trump—the big draw at today's event—thinks about libertarians.