What Drives Donald Trump? 'He's got money, he's got fame…Power is what's left'

Trump biographer Jerome Tuccille on the secret compulsion behind the billionaire's presidential bid. 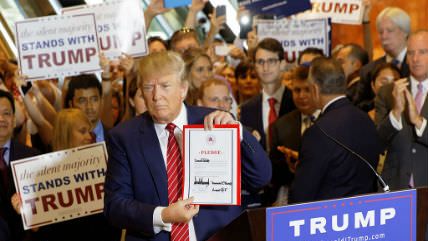 "Donald Trump is to me the American version of Vladimir Putin," says Jerome Tuccille, the best-selling author of the very first biography—1985's Trump—of the billionaire developer. Between his bullying rhetorical style, barely contained xenophobia, and scurrilous comments about Mexican immigrants, Tuccille says Trump "is appealing to the worst elements in our society."

The author of works about the libertarian movement, Ernest and Julio Gallo's wine empire, Ernest Hemingway's politics, and much more, Tuccille's latest book is The Roughest Riders: The Untold Story of the Black Soldiers in the Spanish-American War.

"When republics start to fail, as ours is, it opens the door for demagogue, a strong man. People say they want somebody new," Tuccille tells Reason's Nick Gillespie.

That might explain Trump's appeal to voters, but why does The Donald want to run for president? "He needs power," says Tuccille, whose deeply researched bio on Trump hit the best-seller lists when it was released. "He's got money, he's got fame. What's left for him? Power is what's left."