It's the debt, stupid. 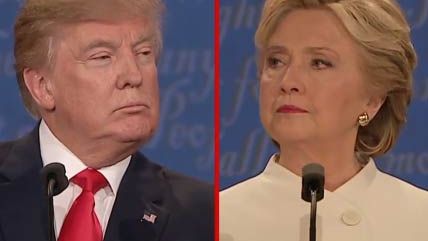 Today, everyone will be talking about about rigged elections, leaked emails, and puppets in the wake of the final presidential debate of the 2016 election. But one much-overlooked aspect of last night's debate was that moderator Chris Wallace finally brought up, in the final ten minutes, a topic no previous moderator bothered to touch: a little thing called "the national debt."

Both candidates were predictably disappointing, with Trump wanting to cut taxes and raise spending while ignoring that it would explode the debt, and Clinton wanting to raise spending and raise taxes while denying any negative effects on job growth. Debt denialists in both parties tend to ignore the belief of mainstream economists that a high threshold of government debt correlates with low economic growth.

Watch the video above for Reason TV's recap of the final presidential debate.