The Next Pandemic Will Be Caused by the National Debt. It Will Crater the Economy.

Debt held by the public equals about 100 percent of GDP. That's hurting growth and will fuel a major crisis. 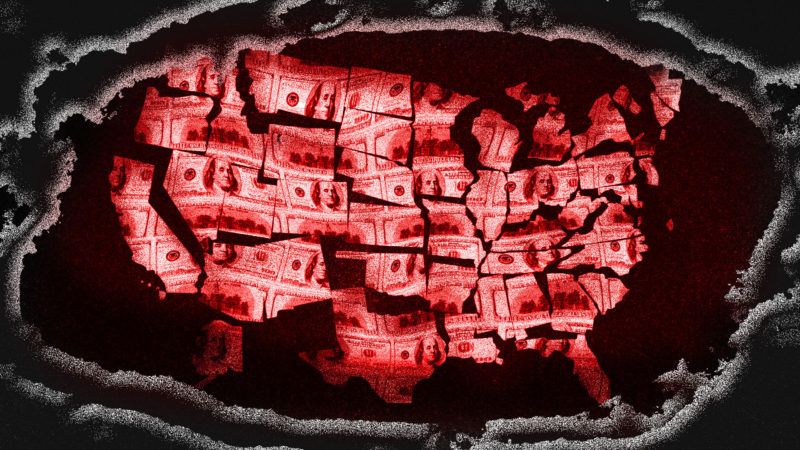 One of the most frustrating aspects of the novel coronavirus pandemic is how many early warning signs and response plans for just such an event were waved away by public health officials, the president, governors, and just about everyone else who could have made a difference. Microsoft co-founder Bill Gates warned about a pandemic in a 2015 TED talk that's been viewed over 29 million times. The George W. Bush administration nearly put in place a pandemic preparedness plan in 2005 before letting it drop. So when President Donald Trump said on March 6 that the coronavirus "came out of nowhere," it wasn't quite accurate.

It's important to underscore that all the death and economic wreckage COVID-19 has caused didn't just "come out of nowhere" because there's another totally predictable crisis that promises to be even more damaging to our way of life: The national debt—the amount of money the federal government owes—is already choking down economic growth, but in the future, it could lead to "sudden inflation," and "a loss of confidence in the federal government's ability or commitment to repay its debts in full." "Such a crisis could spread globally" causing some "financial institutions to fail." That's all according to the nonpartisan Congressional Budget Office (CBO), which has been warning Americans about the long-term consequence of the ballooning debt for years.

Like the coronavirus, the debt problem has the potential to seemingly appear out of the blue and turn our world upside down in a matter of weeks. There's plenty we can and should do to avoid or minimize the potential shock to our system, but Congress and presidents from both major parties have accepted Dick Cheney's false maxim that "deficits don't matter." Instead, they just keep spending more than we take in during good times and bad, even though being so deeply in hock will make us less able to deal with a future crisis.

The amount of money the government owed to the public was 79 percent of gross domestic product at the end of 2019, up from 31 percent in 2001. The COVID-19 lockdowns and subsequent emergency spending will push the curve above 100 percent of GDP by the end of 2020, and it's expected to keep rising.

Emergency spending and plunging tax revenues are making a bad situation worse. CBO forecasts that the budget deficit this year will be 17.9 percent of GDP, meaning that the government is running much larger deficits, racking up significantly more debt, than it did even at the height of the financial crisis of 2007-2008.

Economists such as Nobel Prize-winner Paul Krugman and proponents of modern monetary theory (MMT) look at the absence of inflation and higher interest rates so far as justification for ever-more spending and borrowing. While it's true that the cost of paying interest on the debt is still dwarfed by other expenditures, that's because historically low interest rates have made government borrowing cheap.

But there's no reason to believe that interest rates won't rise over time. According to conservative estimates from the CBO, as the total budget grows as a percentage of GDP, the cost of paying interest on the debt will increase faster until, by 2050, it accounts for about 24 cents of every dollar spent. And these estimates don't take into account emergency spending for COVID-19, which will make servicing the debt even more costly over time. Like a monthly credit card payment that eats into a household budget, federal debt means less money to buy other things.

And when governments run large, persistent deficits, it also has a devastating impact on economic growth over time. Our current debt levels could reduce GDP by about one-quarter over 23 years, according to research by Harvard economists Carmen Reinhart and Kenneth Rogoff. It's a case of what French economist Frédéric Bastiat referred to as "the unseen" because we'll never get to experience how much wealthier we otherwise would have been had the federal government practiced fiscal prudence. Anemic growth will impact the poorest Americans most of all, causing their material progress to slow considerably. It means less leisure time, smaller homes, older cars, and less health care.

In the short-term, there's no question that the government can and will be able to borrow massively, and interest rates are likely to stay low for the time being as the world shifts into recession. But there's also the specter of investors here and abroad refusing to buy U.S.-issued debt as our economy flattens, China flexes its economic and political might, and alternative instruments such as bitcoin and gold offer safe refuge. Like a global pandemic, a debt crisis seems impossibly off in the distance until it's the only thing you can see. Even the most hubristic economist or president would have to admit that there will come a time when the U.S. dollar is no longer the world's reserve currency. That change won't necessarily be as dramatic as when German paper marks became worthless after World War I, but it will massively reduce purchasing power even as it increases the cost of everything.

Spending proponents sometimes cite World War II when talking about battling COVID-19; the analogy is apt for reasons they may not intend. Between 1940 and 1945, federal spending increased tenfold from $10 billion to over $100 billion to pay for the war effort. But when victory was won, the government immediately cut military spending. Once peacetime growth resumed, the debt-to-GDP ratio fell quickly. Then, starting in the 1970s, with the exception of a five-year dip during the economic boom of the 1990s, the federal government has been growing the size of the debt in relation to GDP.

Instead of a foreign enemy, our out-of-control spending has been driven by the persistent rise in the cost of entitlements like Medicare and Social Security. Even as total tax revenues increase, we keep spending more and more, adding to a national debt that costs more to service even as it reduces economic growth.

Despite seemingly just showing up in America without notice, the coronavirus pandemic and all that has happened over the past two months didn't exactly "just come out of nowhere." When the debt crisis materializes and our options are severely limited because of decades of profligate spending, politicians sitting in the Oval Office and Congress will claim that it all just came out of nowhere, like that crazy virus back in 2020.

But nothing could be further from the truth: Budget wonks are already sounding the alarm. We need to heed these warnings now or suffer an economic lockdown later from which there may be no escape.