Can he really build a supersonic tube transport system, which could go from LA to San Francisco in 35 minutes? 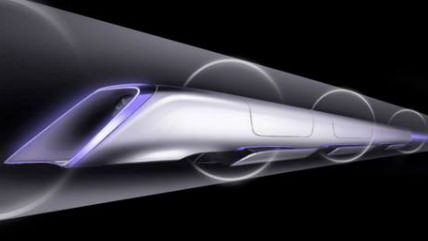 In 2012, Elon Musk, founder of Tesla and SpaceX, released a proposal for a futuristic tube transport system that could go faster than the speed of sound, cutting travel time between Los Angeles and San Francisco to 35 minutes or less. He described it as a "cross between a Concorde, a rail gun, and an air hockey table" that "can never crash," and called it the Hyperloop.

But what exactly is the Hyperloop? "Imagine a capsule with 28 people that's hovering inside a tube at really high speeds of 760 miles per hour," says Dirk Ahlborn, CEO of Hyperloop Transportation Technologies (HTT), which is turning Musk's idea into reality. "It's completely solar-powered, it's cheaper to be built, it's earthquake-stable," he adds.

Ahlborn recently sat down with Reason TV's Justin Monticello to talk about the technology behind the Hyperloop, his vision for a fully integrated system that would span the country, and the stark differences between it and publicly-funded high-speed rail projects.

Among the relative benefits of his project are that it would cost 10-20% of the estimated $68 billion being spent to construct California's high speed rail, cut down on environmental harm and land seizures by running along highways on pylons, actually produce energy, and be at least four times as fast.

But his vision doesn't end at long-distance travel; he imagines a world in which people live in the fly-over states and work on the coasts. Ahlborn, who is also CEO of JumpStart Fund, a crowdsourcing platform for business that is enabling his open source approach to the project, eventually wants an app that allows you to push a button and be in a city hundreds of miles away in under an hour. "A self-driving car comes and picks you up and brings you to…a mini-loop inside the city that then takes you to the larger station," describes Ahlborn. "That's really when you change the way people live."

HTT recently announced an agreement to begin construction next year on a fully functional urban Hyperloop in Quay Valley, California, which the company hopes to complete by 2018. If Ahlborn's team is correct, this futuristic technology may be coming soon.

Produced and Edited by Justin Monticello. Camera by Paul Detrick and Alexis Garcia.