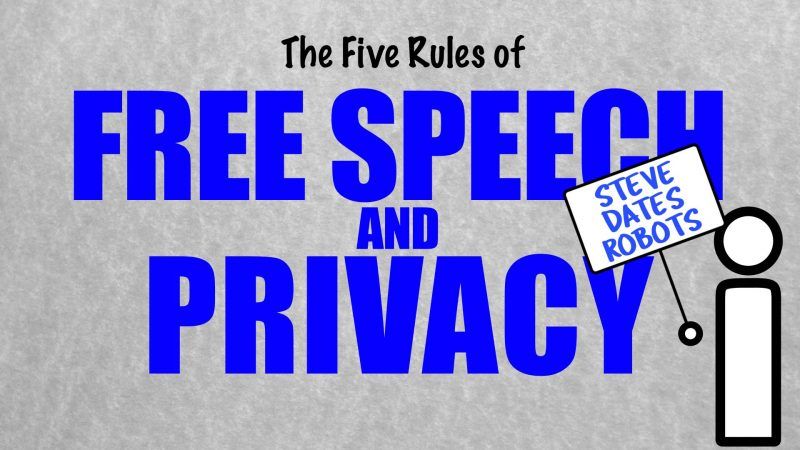 When can the law stop you from saying things about me in order to protect my privacy? Pretty rarely, it turns out.

Let's just make clear what kind of "privacy" we're talking about. The Supreme Court has sometimes discussed a "right to privacy," but that's generally a right to personal autonomy—for instance, the right to buy and use contraceptives. We're not talking about that right here.

We also often have a right to physical privacy in the sense of freedom from trespass or surveillance. The Fourth Amendment, for example, protects us against "unreasonable searches and seizures" by the government. The law of trespass protects us against physical intrusions by our neighbors.

The tort of "intrusion upon seclusion" protects us from other kinds of surveillance, such as people photographing into our bedrooms using high-powered magnifying lenses or people telephoning us repeatedly in the middle of the night. We're not talking about that here, either.

Rather, we're talking about "informational privacy"—restrictions on communicating information about me when I think that information is highly private.

Here are the five rules of free speech and privacy:

Newspapers and TV programs are chock full of such speech about people, many of whom would rather not be spoken about. The same is true of biographies. Even autobiographies usually reveal information not just about the writer, but about his family, friends, lovers, business associates, and more.

Rule 2: We have a nearly absolute right to reproduce information drawn from government records. Newspapers can quote arrest reports, or documents from court cases, even when they describe the private details of the defendant's life—or of a victim's life. For instance, in 1989 the Supreme Court struck down a statute that forbade the media from publishing the names of sex offense victims. Such a statute, the Court held, wrongly limited the right to publish information drawn from government records, such as arrest reports.

And this right doesn't vanish with time. There can be no European-style "right to be forgotten" under American law, at least when it comes to material taken from government records.

Rule 4: Lower courts have allowed some civil lawsuits for so-called "public disclosure of private facts." The Supreme Court has never decided whether this tort is constitutionally valid. But even if the tort can be constitutional, courts agree that it's sharply limited.

First, it applies only to revelations of highly embarrassing or personal information, such as sexual history or medical conditions.

Second, it's limited to statements that aren't "newsworthy." That's a vague line, but courts have read the newsworthiness defense quite broadly: So long as the facts are linked to newsworthy events, such as a crime, people are free to repeat them.

Third, as Rule 2 notes, material borrowed from government records—again, such as trial transcripts or arrest reports—can pretty much always be published.

Rule 5: The strongest protection for privacy is generally contract. If a business, for instance, promises not to disclose information about its customers, that promise can be enforced in court. Same if, for instance, someone who is working for a celebrity signs a nondisclosure agreement as a condition of employment.

Such contracts aren't always enforceable; for instance, if a court orders you to disclose information about a customer, you can't just insist that you had promised the customer to keep it secret. Likewise, a federal statute bars businesses from requiring consumers to sign "non-disparagement" clauses, in which the consumer promises not to publish critical reviews of the business.

But if a contract not to speak is otherwise enforceable, the First Amendment doesn't prevent its enforcement. And that extends to promises of privacy as well as to other nondisclosure agreements.

—
Written by Eugene Volokh, who is a First Amendment law professor at UCLA.
Produced and edited by Austin Bragg, who is not.
Additional graphics by Joshua Swain

This is the ninth episode of Free Speech Rules, a video series on free speech and the law. Volokh is the co-founder of The Volokh Conspiracy, a blog hosted at Reason.com.