As families flock to virtual charter schools and "pandemic pods," California blocks the money from following the child. 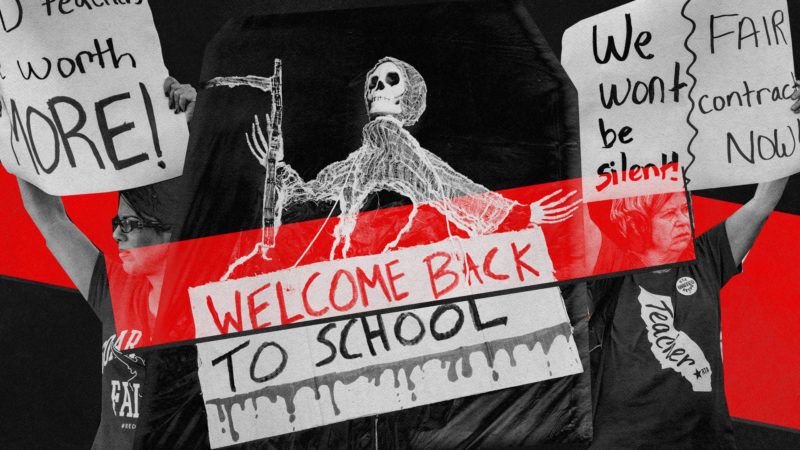 Los Angeles was the first major city to announce that its public schools wouldn't be re-opening for in-person instruction in the fall, and districts across the country have followed suit.

A coalition of California parents is suing the state on the grounds that poor and special-needs children in particular have received inadequate instruction during the shutdown.

School districts around the country are weighing students' education needs against the danger that in-person instruction could cause COVID-19 to spread. And teachers unions are understandably concerned about protecting their members' health.

But in Los Angeles, the teachers union is exploiting the COVID-19 crisis to prevent competition from charter schools, which are seeing a surge of new applicants from desperate parents.

The United Teachers Los Angeles co-signed a document with nine other unions and the Democratic Socialists of America calling for a moratorium on all new charter schools and private voucher programs. A union-backed bill signed into law last October might accomplish that, as it gives local school boards more power to stop new charter schools from opening and existing ones from renewing their charters.

"It's about protecting a monopoly from losing any students and the funding that goes along with those students," says Corey DeAngelis, director of school choice at the Reason Foundation, the nonprofit that publishes Reason TV.

He says entrenched interests are trying to stop families from exercising choice.

"If you really care about students and their safety, you should want more options for more students to be able to spread out in different locations," says DeAngelis. "And this doesn't do that. But what it does do is it allows the teachers unions to block students from switching to their competition."

Families are flocking to charters in part because they were poorly served by district schools in the spring. The United Teachers Los Angeles, which declined our interview request, successfully pressured the district to limit their members to 4-hour workdays and to give them the choice of opting out of live video instruction. In Chicago, nearly half of the district's elementary school teachers logged in to the virtual learning system less than three days a week.

One recent survey found that private or charter schools were more than twice as likely to meet with students daily than teachers at district-run schools and 20 percent more likely to introduce new content.

In addition to the charter school moratorium, United Teachers Los Angeles is insisting that before the district can reopen it needs an additional $250 million in overall funding, a federal bailout, Medicare for All, a new wealth tax, a new millionaires tax, and defunding of the police, among other demands.

"Normal wasn't working for us before," the union asserts, and "we can't go back."

Oregon and Pennsylvania have also cut off additional funding for charter schools. DeAngelis points to comments from the president of the state's association of school administrators in Pennsylvania, who stated his intention to handicap virtual charter schools.

"We're seeing this in a lot of different places, and it's putting the system in front of the needs of families—and in the worst time possible," says DeAngelis.

Los Angeles is already home to more charter schools than any other district in America, and it was a battleground in the school choice movement before COVID-19. Over the past decade, the percentage of students attending charters has surged, taking market share from traditional schools that employ unionized teachers.

United Teachers Los Angeles is using its political clout to keep COVID-19 from accelerating that trend. California schools have traditionally received most of their state funding based on the number of students enrolled. But in July, California froze school budgets in place at the behest of the state's largest lobbyist—the California Teachers Association. That means schools experiencing surges in enrollment won't get additional funding and schools hemorrhaging enrollment won't lose money.

That's limiting the extent to which the California charter network APlus Schools can scale up. It has already increased enrollment by 5,000 for 2021 but had to wait-list an additional 24,000.

"We're seeing a significant increase in parents who under normal circumstances may not choose our school, but…they're turning to us because they want to put their children in a school that has proven track record of providing successful learning in those settings," says Rice.

The budget freeze is also impacting South Sutter Charter School in Sacramento, where Shauna Anderson works as an education specialist.

"And so that benefits these brick and mortar schools where the kids are just leaving in droves, because that's not what they want. And it really penalizes schools like ours because we have all of these students that want to enroll, but we're not going to be able to get funding for them," says Anderson.

"Education really needs to change, this model of education where kids can choose what they want to learn and how they learn best in a truly personalized individual plan is really, I think, the wave of the future," says Anderson. "If we could do it in a public setting, great. But if not, people are going to do it privately."

DeAngelis has reported on a new phenomenon called "pandemic pods," in which groups of parents are pooling their resources to hire their own teachers.

"It's essentially the idea of the one-room schoolhouse," says DeAngelis. "You essentially outsource the process of homeschooling."

He says the rise of the pods, or micro-schools, could permanently change the way Americans think about schooling. It's mostly upper-middle-class families who have the resources to fund these arrangements—leading to criticism in the Washington Post and New York Times—but DeAngelis says that the solution to this problem is to change the structure of education finance so that the money follows the child even outside of traditional, government-certified schools.

"Fund the families directly, so less advantaged families can take advantage of these options as well," says DeAngelis.

President Donald Trump has called for more school choice as a response to shuttered schools. Sens. Tim Scott (R–S.C.) and Lamar Alexander (R–Tenn.) have introduced the School Choice Now Act, which would earmark COVID dollars for parents to spend directly on education. And Sen. Rand Paul (R–Ky.) has introduced a bill that would require states to give parents direct access to federal education dollars to spend on tuition or homeschool materials.

Oklahoma and South Carolina have already begun to redirect money earmarked for schools in the emergency CARES Act directly to parents to cover private school tuition, and some Colorado legislators are proposing to put the money right into parents' hands.

In California, the political power of the union will likely prevent that. But DeAngelis says the current moment could be a turning point for school choice regardless.