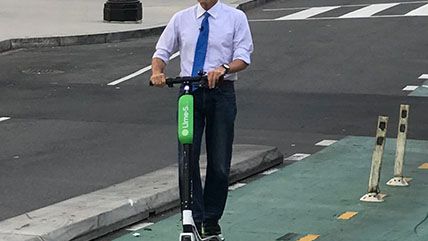 If you live in one of 65 U.S. cities, you've probably seen electric scooters.

To unlock one, you just use an app on your phone. It costs one dollar to unlock and 15-cents a minute after that. You go where you need to go, and then just leave the scooter anywhere. The scooter stays there until someone else rents it. It has a GPS which allows riders to locate them and prevents theft.

John Stossel tested one in Washington, D.C. He wonders if this is the next revolution in urban travel.

Jennifer Skees, who studies technology policy at the Mercatus Center, calls the scooters "a new twist on old technology…something that works even better, to solve needs in dense urban areas."

Yet some cities have banned electric scooters. San Francisco City Attorney Dennis Herrera said they endanger "public health and safety." Skees calls that ironic "because San Francisco always seems to be clamoring for more transportation options…complaining about the traffic and asking for green transportation."

What about safety? A man reportedly died after falling off a scooter and reckless scooter riders have injured pedestrians. Skees answers, "we actually haven't seen a large number of accidents or injuries…we don't ban bicycles because somebody might get hurt on a bicycle."

The scooters anger lots of people. Some complain about safety risks—others despise them as a symbol of techie gentrification. Videos show people throwing scooters into the ocean and setting scooters on fire.

But Maggie Gendron, director of strategic development at the scooter-sharing company Lime, tells Stossel, "it's a low percentage of vandalism…[in one city] 10,000 rides and 18 vandalism complaints."

Some cities are starting to welcome the scooters. San Francisco recently lifted its ban, granting permits to two small companies but rejecting permits to 10 companies including Lime and Bird. Washington, D.C., Austin, Seattle, and about 62 other cities have active scooter-sharing now.

Stossel says, as often happens, entrepreneurs invented something great. He wonders how many cities will impose destructive regulation.