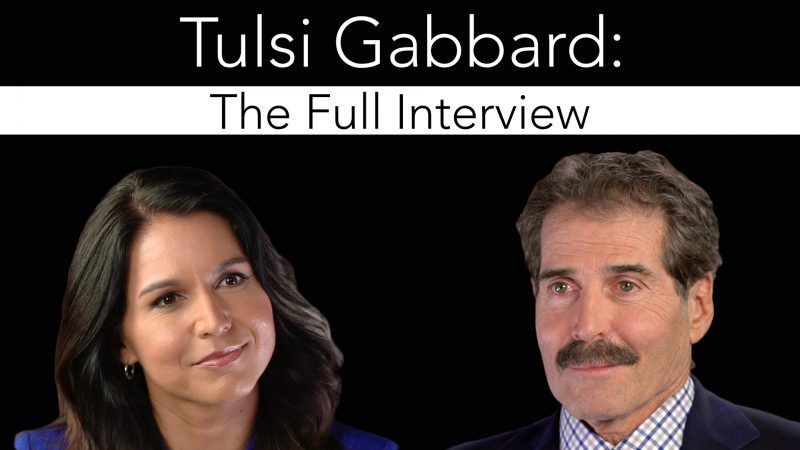 Rep. Tulsi Gabbard (D–Hawaii) will be in the Democratic debate next week. John Stossel says that's good, because she's different from the other Democrats.

One difference is that she served in Iraq, and now pushes for ending wars. "We have to honor our servicemen and women by only sending them on missions that are worthy of their sacrifice," Gabbard tells Stossel.

Instead, American interventions are often open-ended. "There's seldom a discussion that I've heard about what is our mission," Stossel says.

"Exactly! That's exactly the problem…what is the clear, achievable goal?" Gabbard responds. She says her Afghanistan policy would have been: "Go in. Defeat Al-Qaeda. Get out."

Gabbard also says: talk with our enemies. She met with Syria's dictator. The media and other Democratic candidates give her grief for that.

CNN's Chris Cuomo lectured her: "You need to acknowledge that Bashar al-Assad is a murderous despot."

"What's going on with your party?" Stossel asks Gabbard. "Democrats used to the antiwar party."

Gabbard responds that both parties are "heavily influenced by the foreign policy establishment…whose whole power base is built around continuing this status quo. So much so to the point where when I'm calling for an end to these wasteful wars, they're saying, 'well, gosh, Tulsi, why are you such an isolationist.' As though the only way that we can relate with other countries in the world is by bombing them, or by putting crippling economic sanctions in place."

Stossel also asks Gabbard about taking down a Democratic front-runner. In the fourth debate, she criticized Kamala Harris for her history of jailing people.

"She put over 1,500 people in jail for marijuana violations and then laughed about it when she was asked if she ever smoked marijuana," Gabbard said in the debate.

That moment changed the race. Harris lead in the betting at ElectionBettingOdds.com, with a 26% chance of winning the nomination. During the debate, she fell seven points. 10 days later, another seven points.

"You killed her off," Stossel says.

"I'm for the people, man," Gabbard replies, laughing. "I was speaking the truth, and speaking for a lot of people."

Gabbard and Stossel argue, too. Like most democrats, Gabbard would spend billions on expensive new programs. She backs Medicare for All and free college.

"Look how much more it will cost when it's free," says Stossel.

Gabbard responds, "We have to deal with…the root cause of the problem. One of which is…how much administrators of a lot of these colleges are being paid or overpaid."

Stossel and Gabbard also argue over her proposal for a $15 minimum wage.

"How does that not destroy opportunity for a 17-year-old in his first job who isn't worth $15 an hour?" Stossel asks.

"I think we're looking at this as an investment in people," Gabbard answers.

In the end, Stossel says, "I'm glad we could have a civil argument about some of these areas where we disagree. Few politicians want to do that anymore."

She adds: "Look, I love my country. You love our country. Let's come together as Americans with appreciation for our Constitution, our freedoms, civil liberties and rights, and have this civil discourse and dialogue about how we can move forward together."