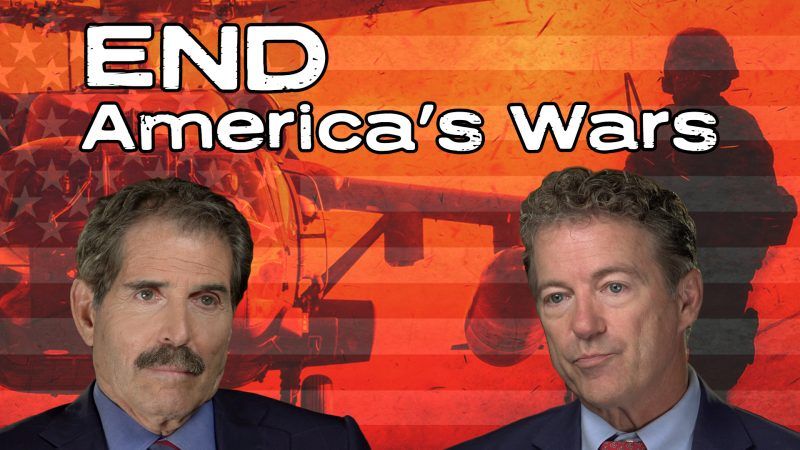 Just three years ago, Sen. Rand Paul (R–Ky.) ran for president and people talked about a "libertarian moment." What happened?

There has been some useful deregulation, but the size of government grew, spending grew sharply, and so did deficits.

Paul explains that neither Republicans nor Democrats were ready. But he points out that there is good news as well.

"But he hasn't pulled out of anywhere," Stossel pushes back.

"Compare it though to George W. Bush…who got us involved everywhere. Or President Obama, who sent 100,000 troops to Afghanistan. The rhetoric of President Trump has been a relief," Paul says.

Paul adds: "Has it happened yet? No, but I continue to push."

It's good, says Stossel, that Sen. Paul reminds Americans that the best plans of those who take us to war often go bad.

In Iraq, America took out Saddam Hussein, but the people who replaced him (ISIS, for a while) were worse.

In Libya, America got rid of dictator Muammar al-Qaddafi, but now torture and slave markets operate in the power vacuum left behind.

In Syria, America armed rebels to fight Assad. But often our weapons ended up in Al Qaeda's hands.

Now Trump's removed some troops from northern Syria. Lindsey Graham calls that "the most screwed up decision I've seen since I've been in Congress."

Rand defends it: "I promise you—50 soldiers, or 2,000 American soldiers, are nothing more than a target for bad people to kill or maim, which will get us drug into a bigger war."