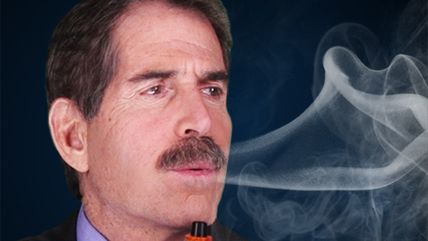 Our government says e-cigarettes and vaping are the latest "epidemic" among teens. So the Food and Drug Administration (FDA) says it will restrict them. Cities across the country are banning e-cigarette use in public.

That's because e-cigarettes let people get a hit of nicotine without actually burning tobacco. The burning of paper and tobacco leaves is what makes cigarettes so dangerous.

Minton admits that the nicotine in e-cigarettes is addictive. But "on the spectrum of drugs that you can become addicted to, nicotine and caffeine are very similar to each other."

The Surgeon General says there are other health risks to vaping: "Besides nicotine, e-cigarettes can contain harmful and potentially harmful ingredients."

Despite the dangers, researchers seem to agree that e-cigarettes are substantially less dangerous than combustible cigarettes.

Other studies concluded that long-term e-cigarette use is "associated with substantially reduced levels of measured carcinogens and toxicants relative to cigarette-only smoking."

Nevertheless, the FDA threatens to crack down to discourage kids from using e-cigarettes.

Minton says that is a bad idea: "Do we want children to become addicted to anything? No….But keeping a small percent of teenagers from trying e-cigarettes is not worth sacrificing adults whose lives could be saved."